How do bamboo shoots affect gorilla ranging patterns? What are the most effective anti-poaching strategies? Does stress affect the prevalence of intestinal illnesses in gorillas? These are just a few of the scientific questions that Fossey Fund staff are studying and will present this week at the joint meeting of the International Primatological Society and the American Society of Primatologists, hosted by Chicago’s Lincoln Park Zoo.

This conference, held every two years, brings together primatologists from all over the world, to present the latest work in primatology. This year, Fossey Fund staff will be well represented, involved in 13 talks (five by our staff and eight with various partners), presenting research studies, posters and attending various workshops and symposia.

Fossey Fund staff presenting at the conference include: Tara Stoinski, Ph.D., President & CEO/Chief Scientific Officer; Felix Ndagijimana, director of our Rwanda programs and the Karisoke Research Center; Winnie Eckardt, Ph.D., Karisoke research manager; Deogratias Tuyisingize, manager of our biodiversity research program at Karisoke; and Congo research director Damien Caillaud, DVM/Ph.D. And, many other Fossey Fund staff will be represented as contributors to the research being presented, since almost every study involves a collaborative effort among many people. 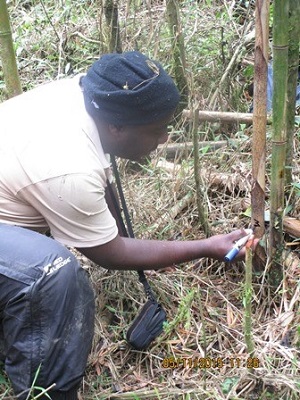 For example, a study led by visiting researcher Melanie Mirville (who is conducting doctoral work through the University of Western Australia), looks at the social and ecological factors that influence interactions among mountain gorilla groups, and  also included the participation of Dr. Stoinski, Samedi Mucyo, Didier Abavandimwe and Veronica Vecellio from the Fossey Fund, as well as two additional researchers from the University of Western Australia. This study analyzed more than 700 intergroup interaction events among the gorillas! Results showed that social factors (such as relatedness and familiarity) in this population seemed to be more prominent in influencing the outcome of such interactions than ecological factors (such as food availability).

Other sessions, presentations and posters by Fossey Fund staff and scientists include the following (and more):