Atlanta, Georgia and Musanze, Rwanda –  The Dian Fossey Gorilla Fund announced today that its gorilla trackers based at the Karisoke Research Center in Rwanda have been honored with a Conservation Hero Award from the Disney Conservation Fund. The Disney award recognizes local citizens for their commitment to reversing the decline of wildlife and engaging communities in conservation. Recipients from around the world were nominated by nonprofit environmental organizations, and each honoree and the nominating organization will share a monetary award from the fund. These gorilla trackers have served on the front lines of conservation for nearly 50 years. Some have even lost their lives defending their mission.  Their daily efforts to protect and monitor this rare type of gorilla have helped bring it back from the brink of extinction. 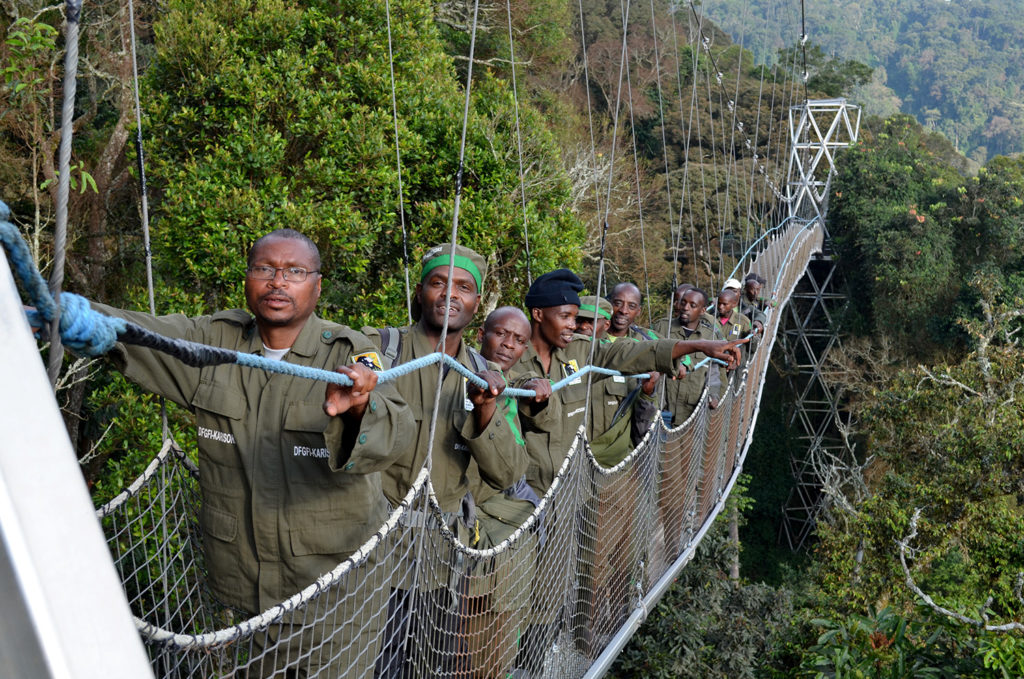 The Karisoke trackers, who support the work of the Rwandan national park authorities by protecting roughly half of Rwanda’s gorillas, are so successful that the mountain gorilla population has more than doubled since the time of Dian Fossey, and is the only wild ape population whose numbers are stable. The trackers now collectively spend more than 110,000 person-hours in the field each year. “This is a tribute to the hard work and dedication of our past and present trackers, whose many sacrifices over the years have led to the successful conservation of the mountain gorilla,” says Felix Ndagijimana, director of the Karisoke Research Center and the Fossey Fund’s programs in Rwanda, who oversees all of the tracking teams at Karisoke. “We’d like to dedicate this award to all our colleagues working in the Virunga mountains, and to all those who have dedicated their lives to the cause of conservation,” he adds. The Karisoke Research Center was founded in 1967 by Dr. Dian Fossey and has been operated by the Dian Fossey Gorilla Fund since her death. The gorilla protection efforts she started have grown significantly over the years and now more than 70 trackers and anti-poachers, working in teams, are in the field every day, protecting half of the entire mountain gorilla population of Rwanda, and supporting important scientific studies on the best conservation methods. “These trackers have dedicated their lives to ensuring the mountain gorillas survive. They are truly the front line in the fight against extinction,” says Fossey Fund President and CEO/Chief Scientific Officer, Tara Stoinski, Ph.D. “We at the Fossey Fund are so incredibly proud of their hard work and dedication, and the hard work of rangers around the world who risk their lives so that we all can continue to enjoy the beauty that is elephants, orangutans, rhinos and the thousands of other species with whom we share the planet. And, we are very grateful to the Disney Conservation Fund for recognizing their service.” Tracker Jean Damascene Hategekimana (known as “Fundi”), who has been with the Fossey Fund for almost 25 years, says: “I have seen how the work we do has reduced the threats the gorillas were facing and am now enjoying seeing the increase in their numbers. I am very delighted that our work not only amazes us but also that the outside world is happy about what we do!” The Disney Conservation Fund focuses on reversing the decline of wildlife and increasing the time kids spend in nature. Since 2004, Disney has honored more than 100 Conservation Heroes from around the world for their extraordinary conservation efforts. For information on Disney’s commitment to conserve nature and a complete list of 2016 Conservation Hero Award recipients, visit Disney.com/Conservation Media Contact: Erika Archibald, Ph.D; [email protected] 678-612-9019
PrevPrevious
NextNext