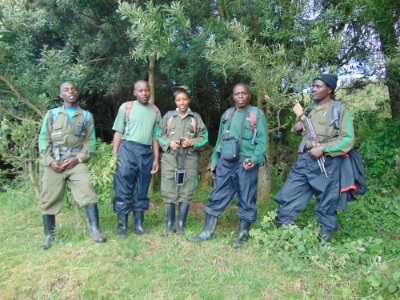 With the first sweep of the mountain gorilla census now underway in the Virunga mountains of Rwanda, Uganda and the Democratic Republic of Congo, including eight of the Fossey Fund’s staff from our Karisoke Research Center, we have an insider look at what it’s like to spend weeks camping in tents in the forest, systematically searching for gorilla nest sites and collecting important information.

Before the census started, there was a period of intense training for all team members, which included two phases of six teams each, usually a mix of people from the three different countries and organizations. The training included a crash-course on how to plan and follow the predetermined routes (called “recces,” derived from the word “reconnaissance”) to search for fresh gorilla trails, use electronic data-collection devices and an application specifically developed for the census, collect and preserve gorilla fecal samples, identify important vegetation, using compasses and maps, and logistics and communications protocols. Notably, this was the first time electronic devices were used for a census (as opposed to paper notebooks and pencils)!

While some of the Karisoke staff were already trained in using electronic data-collection devices and the associated software (called Cybertracker), most participants had to learn it during the training, which required lots of testing and practicing. Many also had to learn how to use a compass, which quickly became a favorite among everyone, says Dr. Winnie Eckardt, Fossey Fund research manager at Karisoke. Eckardt served as an instructor during the training process and also spent the first two days of the census after each training phase in the field with each of the Rwandan teams. Many hours of “fake” recces with “imaginary” forest observations were conducted to make sure everyone had learned all the skills and steps needed, followed by two days of training in the forest.

But finally, on Oct. 6, the census started and all the teams were sent to their camps in or near the forest. Karisoke research assistant Gudula Nyirandayambaje, one of only two women involved in the census, was assigned to a sector where two silverback gorillas had been fighting over a female just a few days earlier. Also on her team is Karisoke tracker Jean Damascene Ndikubwimana.

A day on the trail 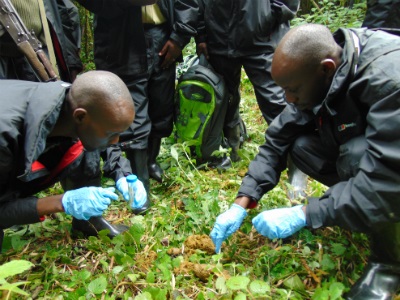 Each long and hard day luckily starts with a generous breakfast, made by cooks who get up early before everyone else and are also the last to go to bed at night, ensuring that the teams are well fed. Camp kitchens are set up in plastic makeshift open “tents” and involve a lot of work beyond cooking, such as getting water and firewood. “We called them our ‘camp mums’ because of the way they take care of everyone and help in so many ways,” says Eckardt. “This is very touching and makes you feel at home!”

On day one, Gudula was in charge of the Cybertracker and after only a few minutes in the forest, her team found a fresh gorilla trail, which they determined must be from where the two silverbacks were interacting. A “mixed” trail of several days is hard to follow and indeed in the next seven to eight hours, the team found five gorilla sites, as well as an interaction site with hair and blood. The trackers reconstructed all these signs like first-class detectives, says Eckardt.

One of the most “delicate” tasks in the census work involves collecting gorilla fecal samples. First, the fecal matter is measured and the nest inspected for long silver hair, to provide an idea of the age and sex of the gorilla. Then samples are collected and preserved for later DNA and parasite analysis. This involves getting the samples into narrow tubes using wooden applicators, without contaminating the sample, while wearing surgical gloves, often in the rain. Then each tube must be carefully labeled. Finally, once a nest has been sampled, the wooden applicator along with a note showing the nest number at each nest site is left on the sample.

In addition to all the gorilla information, the census teams also look out for signs of large mammals. Eckardt says her team found a fecal sample from a large carnivore that also included teeth and bones inside it! Illegal activities are also recorded, such as snares set for game animals but which can harm the gorillas too.

Once the day is over, everyone hikes back to their camp but there is still work to do. All the samples collected for DNA analysis have to be transferred to other containers and all the devices and radios have to be recharged, using a generator, which takes about three hours. But after that, it’s nice and quiet and everyone goes to sleep early, after at least 10 hours hiking in the mountains all day.