“Little did I know then that by setting up two small tents in the wilderness of the Virungas I had launched the beginnings of what was to become an internationally renowned research station eventually to be utilized by students and scientists from many countries.”
Dian Fossey, from Gorillas in the Mist 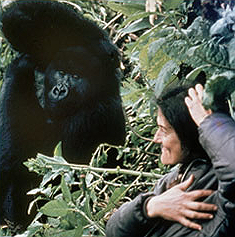 Dian Fossey set up those two small tents on Sept. 24, 1967, establishing the Karisoke Research Center in Rwanda’s Virunga mountains. She located the camp between Mt. Karisimbi and Mt. Visoke, creating the name “Karisoke” from the names of the two mountains. At that time, she feared that the mountain gorilla might become extinct by the end of the 20th century, as her mentor, Dr. Louis Leakey, had warned. In the early 1970s she found that the population had fallen to 275 individuals, from a 1963 estimate of 450.

Although Fossey’s original focus was on study of the mountain gorillas, she soon realized that if they were to survive, they would require protection as well. Among the threats were poachers who set snares in the forest, cattle grazing, and human encroachment into the forest. After one of her favorite gorillas – Digit – was killed by poachers in 1977, Fossey established the “Digit” Fund, to support active conservation of the gorillas. After her death, the Digit Fund was renamed the Dian Fossey Gorilla Fund International (DFGFI), which continues to operate Karisoke today. 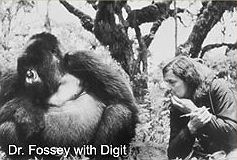 Now, 40 years later, Fossey might be surprised to learn that some 380 mountain gorillas are known to inhabit the Virunga mountains (according to a 2004 census), a significant increase since Fossey’s time. She might be even more surprised to see how Karisoke itself has survived not only her own murder in 1985 and years of civil strife and other hardships, but that it has also expanded tremendously from its humble beginnings to what is now a world-class scientific and conservation institution, providing daily protection of the mountain gorillas, ongoing study and research, as well as new programs in education, health, and economic development for the human communities in the region, and expansion of its expertise to other gorilla habitats, especially in the neighboring Democratic Republic of Congo.

Throughout the years, the emphasis on both research and protection has continued at Karisoke, although research was slowed or halted during certain periods of civil unrest. Karisoke’s facilities were built and destroyed a number of times, and today have been moved to the nearby town of Musanze (formerly Ruhengeri), with outposts in the forest. In recent years, Karisoke has also added programs geared toward education and health in local communities. Today, the Karisoke Research Center employs some 80 staff members, with more than half of these in research, protection, and monitoring of the gorillas, with other staff in education, health, and administrative functions. 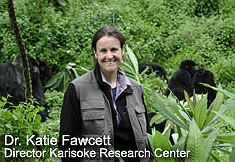 Karisoke’s anti-poaching staff are “active conservationists” in the field, and collect information daily on the location of different types of illegal activities in the park and on all types of park encroachment, such as cattle grazing and firewood collection. They also remove snares in the forest, most of which are set for antelopes and other small game. All data are shared and analyzed in conjunction with the Rwanda park authorities (ORTPN), to help guide park management decisions. In addition, a mobile anti-poaching unit consisting of staff from DFGFI and ORTPN provides additional protection for the gorillas by moving camp each week, to patrol different sectors of the forest and catch potential poachers off guard. Cross-border patrols with local teams from the Ugandan and Congolese sectors of the Virungas have also been established. 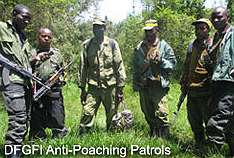 Karisoke’s and DFGFI’s most recent accomplishment has been to implement a wide range of programs based on the recognition that humans and wildlife depend on each other and must share an ecosystem. Health, education, and microeconomics programs for Karisoke’s neighbors began in the 1990s, in partnership with Rwandan government agencies, educational institutions, and local communities. These programs offer alternatives to poaching; prevent disease transmission between people and gorillas; help nurture a new generation of conservationists; and educate people about the importance of preserving wildlife and the forest environment. 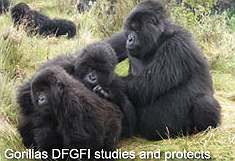 Karisoke’s influence today reaches far beyond Dian Fossey’s vision. Through DFGFI, Karisoke works in collaboration with Rwandan leaders, who recognize that the gorillas and their habitat contribute significantly to their country’s economic sustainability. It continues to attract scientists and students who study both practical and basic scientific questions regarding the mountain gorillas. It has also inspired the establishment of community-based gorilla reserves and a conservation university in the neighboring nation of the Democratic Republic of Congo. Finally, Karisoke stands as a tribute to the courage and vision of its founder, Dr. Dian Fossey, one of the great women of the 20th century, and to all those who have followed her inspiration in the 40 years since she set up her two tents in the Virunga mountains.