Fossey Fund Research Program Director Damien Caillaud, DVM, Ph.D., recently led a discussion about the Ebola virus, highlighting how it affects both humans and wild animals. Caillaud’s discussion included an overview of the Ebola virus’ natural history based on medical, behavioral, and genetic data collected in humans, gorillas, chimpanzees, bats, and other species. Since its discovery near the Ebola River in 1976, the virus has been responsible for 24 human outbreaks in Africa, the most severe of which is currently striking West Africa.

How the virus circulates among wild animals and how it gets transmitted to humans from infected wild animals are complicated questions, says Caillaud. Bushmeat hunting has been identified as a key factor and many of the human epidemics observed in Central Africa started with a hunter handling the dead body of a gorilla or chimpanzee. But, since there can be more than 15 years between human outbreaks of the disease, it is also likely that the virus has one or more other hosts, probably forest-dwelling animals, where it remains “silent” for years. That means it is critical to study what is going on in wild animals, if we want to predict or try to prevent human outbreaks.

Ebola in gorillas
While Caillaud was working on his Ph.D. in Republic of the Congo in 2004, an Ebola outbreak occurred. Of 365 gorillas Caillaud observed, 95% died within one year. At the regional level thousands of gorillas died. Caillaud noted that solitary males were less likely to be infected than those living in groups, since the latter engage in frequent physical contact and probably also touch or groom the bodies of deceased individuals. He also found that transmission very likely occurs between groups as well. This is not surprising given what we know about gorilla behavior in this region. When the dominant male of a group dies, the group disbands, and the females emigrate and join other groups or solitary males. In addition, when an uninfected group encounters the body of a dead gorilla in the forest, some of its members may touch the body and get infected. 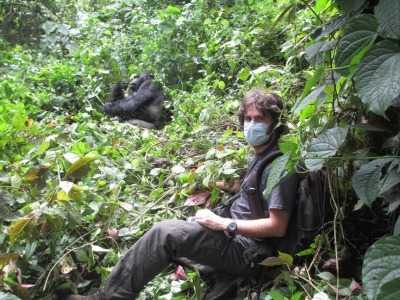 If no natural barriers or local decrease in ape density stop the spatial spread of the virus, entire populations of great apes can be wiped out in a few months. Indeed, surveys of northern-Congolese forests showed that thousands of gorillas died during the 2001-2005 outbreaks.

What Caillaud concluded from his observations during this Ebola outbreak is that they are just as susceptible as humans. The virus naturally circulates in Central African forests among animals that can carry and shed the virus for long periods of time, such as fruit bats. The first gorilla to get infected may have been in contact with Ebola while feeding in the same fruit tree as a contagious fruit bat. This “patient zero” subsequently infects the rest of his group, and the virus spreads from group to group through the forest. These great ape outbreaks may have lasted several years, spreading slowly over a few hundred miles. Local hunters touching infected gorillas or chimpanzees got infected several times during this outbreak, resulting in the several human outbreaks recorded during this period.

The current outbreak
The current situation in West Africa is a bit different, since gorillas do not live in this area. The virus may have been circulating among West African fruit bats for a long time. It is not known how patient zero (a child) was infected. Maybe he touched an infected wild animal killed by a hunter. Or maybe he handled fruit contaminated by a bat.