Partners in Conservation at the Columbus Zoo Sets an Example 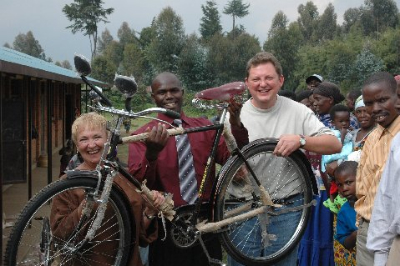 2012 marks the 21st year that Partners In Conservation at the Columbus Zoo (PIC) has supported the Fossey Fund, starting with a small grant to help rebuild the Karisoke™ Research Center after one of the times it was destroyed by civil war. The original site was finally abandoned and the headquarters moved to the nearby town of Musanze, but as Karisoke continued to operate and even expand, so did the partnership with PIC.

PIC Project Director Charlene Jendry began her career in conservation as a zoo docent. Inspired by the gaze of a female gorilla, she became a gorilla keeper and even had an opportunity to spend four days with Dian Fossey, who was on a book tour in Columbus. There was no turning back. In 1992, Jendry spent six months studying gorillas at Fossey’s Karisoke Research Center. With support from Jack Hanna, who was director of the Columbus Zoo at the time and who later joined the Fossey Fund board, Jendry and three zoo docents started PIC, which contributes to wildlife conservation and related community development projects in Rwanda and the Democratic Republic of Congo (DRC).

Every year Jendry and a group of other members of the PIC team spend seven weeks in Rwanda, with the next trip coming up in late May. They visit with all the Karisoke staff, in Bisate, where most of the staff live, as well as in the Musanze office. The field staff includes trackers whose salaries they have helped pay for many years so the mountain gorillas can survive. 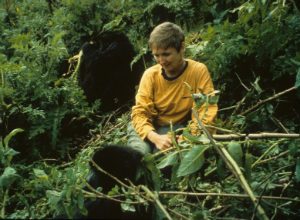 “First and foremost what I remember about when I was at Karisoke the first time was my introduction to the Karisoke staff,” says Jendry. “Those men who had dedicated their lives to the gorillas impressed me so much then and continue to impress me. Dian, and the men she taught who now teach others, make it possible for those animals to still be on this earth. They do it quietly and with great dignity.”

PIC works in the community as well. The PIC team always visits the Bisate School, and are greeted by Karisoke Conservation Education Director Joseph Karama and a joyous crowd of 2,500 students eager to meet the PIC team and receive another year’s gift of school supplies purchased in Rwanda with PIC funds. A special gift this year will be a DVD player and discs that teach about earth science. They will also give bicycles to 25 teachers who did not receive them when PIC first provided bicycles to teachers three years ago. This simple and affordable means of transportation will save a busy teacher hours each day and lift morale.

Jendry emphasizes that PIC shares the Fossey Fund’s understanding that conservation must involve local people. “Of course it was gorillas that took our project to Rwanda, but it was collaboration with Rwandans that we came to appreciate. A Rwandan told me, ‘We look at conservation from the outside in: If you take care of local people then they don’t need to go into the forest to take care of their families. The forest stands; the gorillas live.’ “

Bisate is not the only school in the communities near gorilla habitat to benefit from PIC’s broad understanding of the relationship between people and wildlife conservation. For the third year, PIC will make it possible for Karama to offer the Disney Company’s conservation education curriculum in four schools. Some of the funding is raised by children at 40 American schools where PIC provides education on conservation in Rwanda and the DRC. The students also make a small gift – this year a bookmark that they color and sign – for their 2,500 counterparts at Bisate. “The American children not only learn about conservation but also learn that by working together they can accomplish a lot to support conservation,” says Jendry. And the relationship is reciprocal – the Rwandan students make something to send back, such as drawings that are printed and distributed to 130 teachers in the American schools. 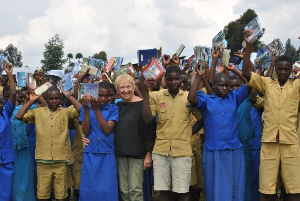 The PIC team will also meet with another Fossey Fund partner they support, the Mountain Gorilla Veterinary Project that saves the lives of sick or injured gorillas each year. PIC provides salaries for one Rwandan and one Congolese veterinarian, and this year has added an administrative salary. They fund 16 crafts cooperatives in Rwanda and work with a group of American zoos that sell the merchandise, as well as helping to support an orphanage, a center for disabled people, and other projects in the DRC as well as Rwanda.

PIC accomplishes all this with the help of generous donors and a very successful annual fundraising event: the Rwandan Fete, held at the Columbus zoo. The zoo pays all expenses so that 100 percent of the admission and sales income goes to conservation and community projects in Rwanda. Dinner features Rwandan food flavored with spices the PIC team brings back from their trip, and Rwandan coffee and tea. Plants on loan from local nurseries create a forest ambience, an African market sells products from the crafts cooperatives, African music plays and a guest speaker from Africa addresses the crowd. The event sells out quickly every year.

“Partners like PIC, who truly engage with the work we do and the people we work with in Africa, provide so much more than financial support, important though that is,” says Fossey Fund President and CEO Clare Richardson. “They inspire us and energize us. Charlene Jendry and the Columbus Zoo have been true friends to us over the years and have brought gorilla conservation to the Columbus community in many creative ways. I hope their example encourages other individuals and zoos to do the same.”