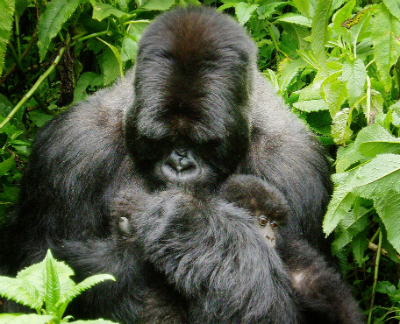 “Isabukuru has always been one of my favorite animals – even years ago when he was just a blackback in Pablo’s group – because all of the females absolutely loved him” says Karisoke™ researcher Stacy Rosenbaum, who is currently carrying out a study on paternal investment in mountain gorillas. “I always knew that he would lead his own group as a dominant silverback someday.” These days, Isabukuru is a primary focus of her paternal investment study, because not only females are drawn to him, but also the youngsters.

“Isabukuru actively seeks out interactions with kids in a way that I’ve never seen another silverback do” says Rosenbaum. The gigantic silverback has been observed carefully carrying the tiny infants clutched to his chest, engaging in play behavior and patiently tolerating the youngsters’ antics like no other adult male would. Rosenbaum says that it is not uncommon for the young ones of his group to climb on top of his broad chest during the group’s resting periods, where they will attempt to push each other off in a lively game of “king of the hill.” The field staff all emphatically agree that there is no other male gorilla monitored by Karisoke in the last decade that has taken such a great interest in his offspring.

Breaking out on his own

Maternal brother to Cantsbee, the renowned 33-year-old dominant silverback of Pablo’s group, Isabukuru possesses many of the same attributes that make Cantsbee so endearing to humans. Cantsbee is also extraordinarily tolerant of the youngsters in his group and can often be seen with a string of fluffy infants on his trail. However, when it comes to play time and deliberate interactions with the little ones, it is clear to all of the field staff that Isabukuru takes the cake for “dad of the year.” 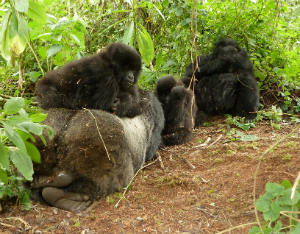 The “Don Juan” of mountain gorillas, Isabukuru frequently found himself in trouble with older brother Cantsbee during their time together in Pablo’s group. Even though Isabukuru was still just a blackback, he was exceptionally large for his age. The female gorillas were crazy about him and pursued him at every opportunity. As alpha silverback of the group, Cantsbee held strict mating rights and was not pleased when his little brother would mate with the females.

Fortunately for both brothers, an interaction between Susa’s and Pablo’s groups on June 26, 2007 allowed for Cantsbee to be free of his sibling competition and Isabukuru to break out on his own and start a new group. Four females, Icyizere, Muntu, Muganga and Ishema, transferred from Susa’s to Pablo’s group during the interaction. The next day, Pablo trackers returned to the forest to find only Ishema still within Pablo’s group. Isabukuru had left – taking his three newly acquired females with him. He was just 14 years old.

Kubaha, beta silverback (and the only other male) is an unusual member of Isabukuru’s group. Kubaha serves as the “watchdog” and can usually be found well outside of the group or traveling peripherally. Isabukuru does not allow Kubaha to mate with the females or play a strong role in the daily group dynamics. Only when confronted with the threat of another group or a lone silverback will Isabukuru join forces with Kubaha to defend the females and youngsters.

The dominant silverback’s wariness of his beta male could likely stem from an unfortunate incident of infanticide that occurred in July 2010. Isabukuru had traveled almost 600 meters away from his group to confront a lone silverback before the intruder could reach his females. While he was away, Kubaha attacked female Bukima and her seven-month-old infant Agatako (presumably Isabukuru’s offspring). The blackback bit the youngster and he died instantly.

Gorilla Program Manager Veronica Vecellio admits that Isabukuru’s tendency to leave his group unguarded is atypical for dominant silverback behavior. However, both the male and his female group members appear unperturbed by the occasional separation. The field staff hopes that this behavior won’t invite another such incident sometime in the future, but only time will tell. 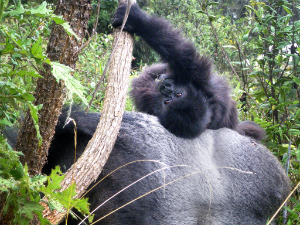 One thing is certain. With a tolerant and relaxed silverback like Isabukuru often comes a more relaxed group of gorillas. Rosenbaum says that to her, one of the most distinguishing characteristics of Isabukuru’s group is the amount of “group play” she observes. The researcher says that all of the adults within the group engage in play behavior on a regular basis, not only with the infants, but also with one another – a rare occurrence among mountain gorillas.

Female gorillas, youngsters or human observers – it seems that no one escapes Isabukuru’s charms. Stay tuned for a photo essay on the endearing silverback and his offspring in the coming weeks!

Our world is facing an ever-changing challenge in regard to the novel coronavirus (COVID-19).  The overall impact is yet to...