Protecting gorillas every day is an enormous effort that takes teams of dedicated trackers, anti-poachers, researchers and other personnel. The Dian Fossey Gorilla Fund employs more than 70 gorilla trackers, who do the difficult work every day of locating every gorilla group under our care, often hiking for hours in steep terrain, starting from where the gorillas were left on the previous day. The Rwandan park authorities (RDB) also have trackers and anti-poaching patrols working every day to protect different groups of gorillas.

Recently, we added two new trackers and a new anti-poaching member to our teams, since in addition to the nine groups we monitor routinely, there are also several small groups of dispersed gorillas (females with infants), groups going out of the park during the evening, and other challenges that require significantly more tracker time and effort.

Zebron Aimé Niyonshuti and Hamudan Nkerakurinda started work as trackers in February, with Emmanuel Ntezirizaza beginning work as a new anti-poaching team member in December. Zebron and Emmanuel had already done some work with the Fossey Fund in Rwanda as support staff and all of them already had a strong interest in the gorillas and protecting the park, because of the importance to the local communities, the country and to conservation.

“Gorilla trackers must have the ability to follow and find gorillas under changing and difficult conditions,” says Felix Ndagijimana, the Fossey Fund’s director of the Karisoke Research Center and all our programs in Rwanda.

“Throughout our many decades of gorilla research, our trackers have had to adapt and strategize to follow group splits, individual dispersed gorillas, illnesses and injuries among the gorillas, and even gorillas moving from one side to another of a mountain in just one day! In Rwanda we have the most experienced and capable team of trackers of the world and any new member of it must be trained to reach a high standard of performance.”

That’s the process that the new trackers are going through now, as they learn all the ins and outs of the work. “Tracking is very demanding and requires a lot of commitment, determination, devotion, carefulness and team spirit,” says Zebron. “However, to see how gorillas live is an amazing experience and worth all the effort! The first day I saw the gorillas I was terrified – they were staring at me and I thought they knew that I was a new person. But even though they are huge, they are very peaceful animals,” he says.

It takes a lot of stamina to find and follow the gorillas, as well as a lot of study to learn who is who, says Hamudan. “Tracking requires you to be very fit and have good endurance,” he says, “but when you reach the gorillas and see how amazing they are, you feel replenished.

“At first I could not tell them apart,” he adds, but now he is glad that he can identify them, so that he’s prepared to report on every detail of their well being and activities each day.

In addition to being amazed by the gorillas’ similarity to humans in form and behavior, new anti-poaching member Emmanuel says that the team spirit among the field staff is what makes this difficult work extra special. 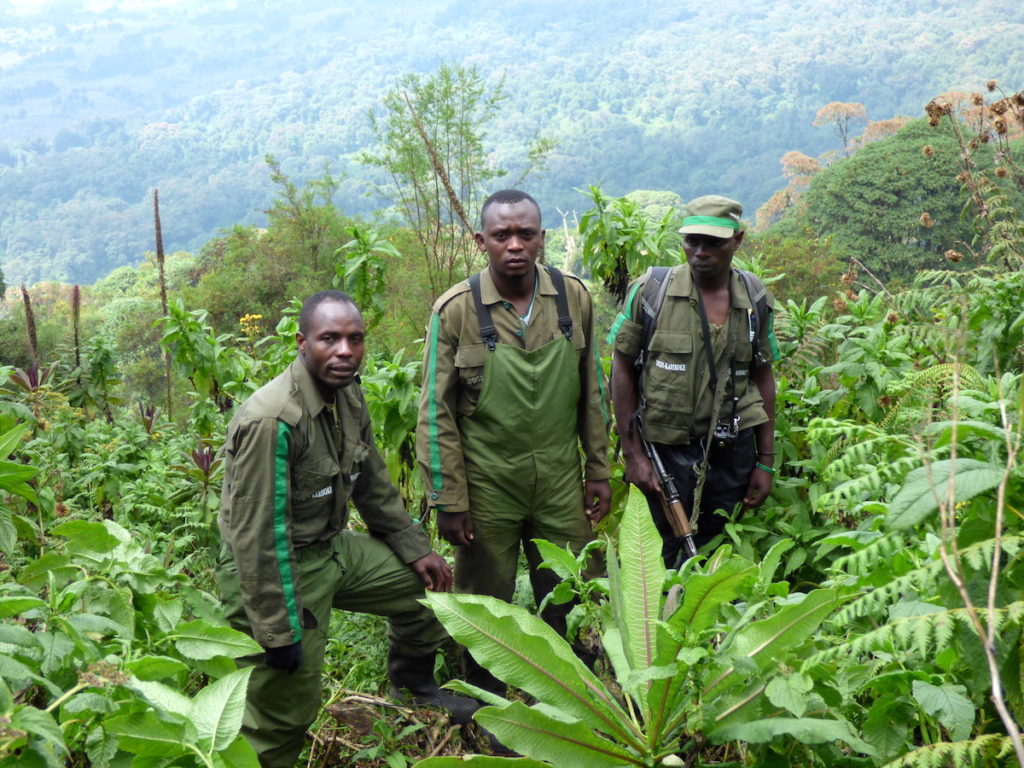 Trackers are the frontline of gorilla conservation

“Our job is very crucial in the conservation and protection of biodiversity, since we cover every corner of the forest and immediately spot anything that can harm the gorillas or other animals and plants. We remove threats where possible and provide information so that the Fossey Fund and park management can put in place informed strategies to fight these threats,” says Hamudan.

There are many changes going on among the gorilla individuals and groups that we monitor at this time, so everyone at Karisoke is happy to have extra new trackers!

“They are a very meaningful addition to our team,” says Jean Pierre “Samedi” Mucyo, the Fossey Fund’s gorilla protection and monitoring officer in Rwanda, “especially since we are observing a very dynamic and changing time among the gorilla groups. We are lucky to have such committed and dedicated team members, who are also fresh in body and spirit, and very eager to learn new things.”

“When you are with trackers you realize a sense of ownership and pride of their job. It’s undeniable that finding wildlife in dense forest is a task that just few people can do. This is the most important and tough component of the gorilla protection and every tracker knows that,” says Veronica Vecellio, gorilla program manager at the Fossey Fund’s Karisoke Research Center in Rwanda.