November 4, 2020 (ATLANTA) – As wildlife populations decline around the globe, understanding the natural and human-induced factors that influence their growth is critical for determining the risk of population declines and developing effective conservation strategies.

In a new study by the Dian Fossey Gorilla Fund and University of California Davis, “Violent encounters between social units hinder the growth of a high-density mountain gorilla population,” in the journal Science Advances, scientists used five decades of data to examine the role of social behavior in explaining fluctuations in the growth rate of a subpopulation of mountain gorillas monitored by the Fossey Fund.

The researchers found a dramatic slowing of the population growth rate as a result of social factors, namely increases in infant mortality resulting from violent encounters between groups living at higher density and with more overlap in their home ranges.

“This is one of the few studies to demonstrate the considerable impact that social behavior can have on whether or not a population grows,” says Dr. Winnie Eckardt, co-lead author of the study and research manager at the Fossey Fund.

Roughly 600 of the estimated 1,063 remaining mountain gorillas live in the Virunga massif, a small forest spanning the countries of Rwanda, Uganda and the Democratic Republic of the Congo. 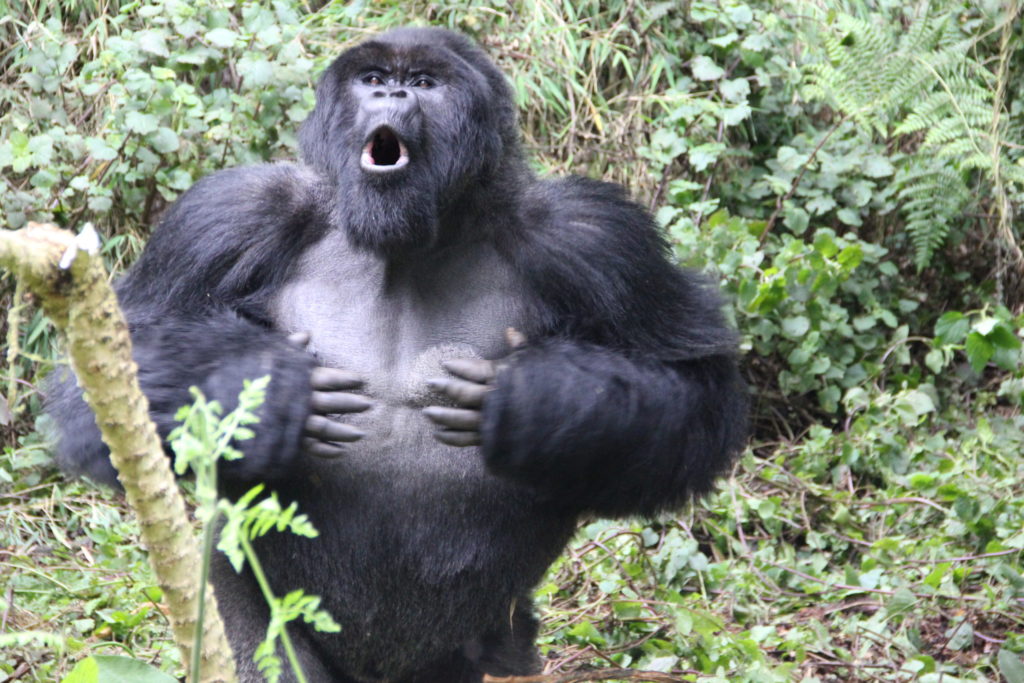 While small, the population has grown significantly since the early 1980s, when there were estimated to be just 250 individuals. Conservation measures implemented since then in this 430-square-kilometer forest led to a remarkable recovery of the Virunga mountain gorilla population. Repeated censuses during the 1980s and early 2000s, however, found the population growth to be uneven, with the subpopulation monitored by the Fossey Fund experiencing a faster growth rate than the rest of the population.

By 2006, this study population was composed of three large stable groups, each with multiple silverbacks. While the average gorilla group numbers 10 individuals, these groups ranged from 25 to a record 65 gorillas and included up to eight silverbacks.

When the young silverbacks in these groups started challenging the older group leaders, the resulting social instability led to a series of group fissions and formations. As a result, an area previously shared by just three groups was now occupied by up to 11 smaller groups, with fewer silverbacks per group.

Expansion of these groups into new areas was limited by the presence of agricultural fields immediately next to the park and the presence of other gorilla groups. The threefold increase in group density resulted in higher overlap in home ranges between groups and more frequent intergroup interactions. Such interactions are often violent, as males hoping to attract females target other males and their infants. As a result, infant mortality increased by 57%, contributing to slowing the annual population growth rate from 5.05% to 2.37%

“Before 2007, we would talk about intergroup encounters for months because they were so rare,” recalls Eckardt. “After that, they began to happen with such frequency that we could hardly keep up with documenting them.”

One implication of the findings is that in socially living species, the density of groups rather than the density of individuals may play a larger role in regulating population growth. “Scientists often talk about how many individuals an environment can hold, also known as carrying capacity,” say co-author Jean Paul Hirwa, the Fossey Fund’s gorilla program manager. “But what these data clearly show is that for social species, this number can depend on how the animals chose to organize themselves. For example, 100 gorillas living in three groups, as we saw in the 2000s, likely require less space than 100 gorillas living in 10 groups.”

“The Virunga gorilla population has been increasing for almost 40 years, but its habitat has not. As the gorilla density reaches unusually high value, scientists fear that between-group aggression and stress will significantly affect the welfare of the animals,” says Dr. Damien Caillaud, a co-lead author of the study and associate professor of anthropology at UC Davis.

The study also shows the challenges for the broader Virunga mountain gorilla population. Other mountain gorilla subpopulations within the region now look similar to the study groups in the 2000s, with high growth rates, large sizes and multiple males.  Should they undergo a similar set of social changes, this could result a further slowing of the overall growth of the population.

“This study highlights the value of long-term data to understanding the ever-changing population dynamics of a species, which is ultimately linked to its conservation,” says Dr. Tara Stoinski, co-author and CEO of the Fossey Fund. “Mountain gorillas are an incredible conservation success story, but their population is very small—just over 1,000 individuals. Our hope is that improving our understanding of what factors are influencing the population’s growth will aid in developing effective conservation strategies.”