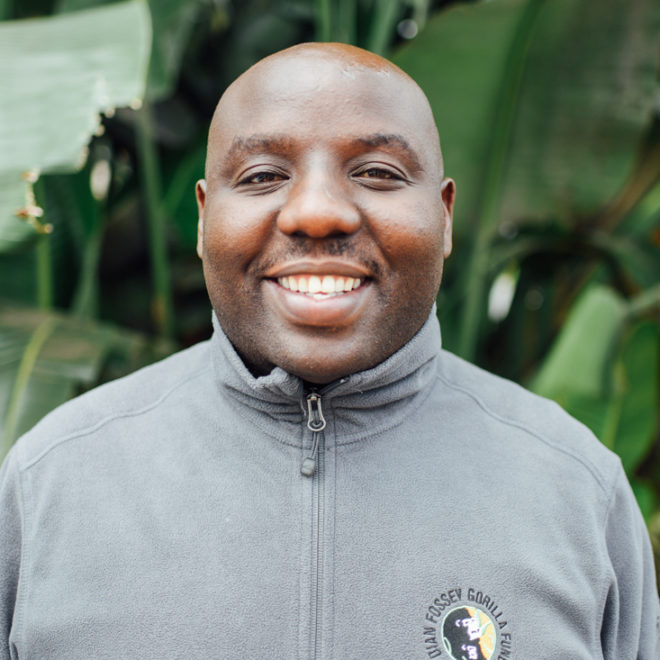 Deogratias Tuyisingize is a wildlife biologist, researcher, and ecologist whose research focuses on biodiversity conservation in Rwanda. He first arrived at Karisoke in 2004 as an intern working on the habituation and behavioral ecology of the endangered golden monkey (Cercopithecus mitis kandti). Since 2006, he has been working as a researcher at the Karisoke Research Center collecting long-term behavioral data on the golden monkey in the Volcanoes National Park (VNP). In 2010, after completing his master’s degree in conservation biology from the University of Cape Town, he was appointed as the Biodiversity Program Manager for the Karisoke Research Center, and he is honored to remain in this role today.

His primary areas of research for more than 11 years have been the golden monkey and its habitat, as well as developing effective conservation and management strategies to protect Rwandan biodiversity. An enthusiastic and ambitious conservationist, he has implemented multiple research projects, including an investigation into the population size and range of the golden monkey in the VNP in 2007 and 2011, studying the distribution of large and small mammals, piloting the camera trapping in the VNP, examining the phenology of bamboo in the both VNP and Kahuzi-Biega National Park in Congo, and he has conducted an extensive bird and amphibian monitoring program. In addition, Deogratias is responsible for mentoring and supervising undergraduate students from Rwanda’s national universities and teaches applied conservation biology field courses for university students at Karisoke. In April 2016, Deogratias was admitted as a Ph.D. candidate at the University of Rwanda where his research focuses on the “conservation ecology of the golden monkey in their remaining habitats in Rwanda” while remaining the biodiversity research manager at Karisoke.