Grauer’s gorillas (formerly known as eastern lowland gorillas) are found only in the Democratic Republic of Congo, and recent reports suggest their population has plummeted by almost 80% in the past two decades. With perhaps as few as 3,800 Grauer’s gorillas left, most of them living outside of protected areas, intense conservation on their behalf is necessary, in order to prevent their potential extinction, after years of insecurity, hunting and other threats have decimated their habitat.

The Dian Fossey Gorilla Fund has been working in the core of Grauer’s gorilla habitat since 2012, and is protecting a forest that contains an estimated 100 gorillas. We are now present in this forest 365 days a year with two tracking teams successfully protecting the area. In addition, we have just added a third tracking team and are in the process of hiring a fourth team to explore additional areas where Grauer’s groups may be located, so that we can double the number of Grauer’s gorillas we are protecting within the next few years. 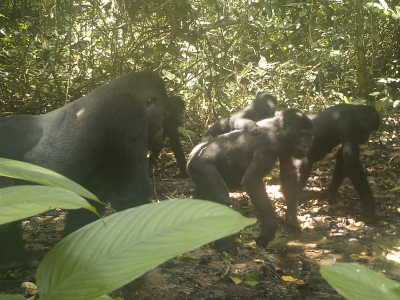 In addition to our daily protection in the forest, a key feature of the Fossey Fund’s work in protecting Grauer’s gorillas in Congo is the involvement of local communities, especially traditional landowners. All of our field staff are hired from local villages, and in addition to employment, community development efforts are underway, such as small-scale sustainable farm projects to help decrease malnutrition and bushmeat hunting.

It is clear that our efforts to protect Grauer’s gorillas are succeeding. There have been no reports of gorilla deaths by local community members in the area we work since our programs started. Traditional landowners are working to reduce or prevent hunting on their lands, and some wildlife, such as monkeys,  which had been rarely seen before, are now seen on a regular basis. As we expand our programs, we look forward to working with more communities to ensure that more gorillas, and all the biodiversity that shares their habitat, are protected.