Celebrating two births in one group

Two gorillas have been born recently in one of the groups monitored daily by the Dian Fossey Gorilla Fund in Rwanda. The first was born on March 21, to mother Pasika, and the second was born on April 10, to mother Kurinda. Interestingly, both mothers transferred to this group, led by silverback Giraneza, after an interaction caused the death of the leading silverback in their previous group. 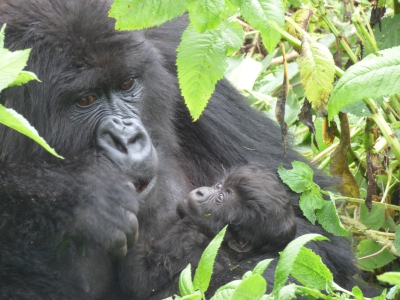 Calculations suggest that both infants were conceived in the previous group, which could have posed dangers for the infants now living under a new silverback. However, enough time has passed by now to suggest that Giraneza has not been able to “do this math” and does not suspect he is not the father.

Now our staff hopes the infants survive the long cold and rainy season! The group now contains six gorillas and we wouldn’t be surprised to see another birth some time soon, from the other female, Inziza.