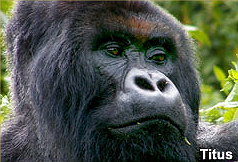 Silverback Titus is one of the oldest mountain gorillas we study from our Karisoke Research Center, and has been observed closely throughout his entire life. He was born in August 1974, and first noticed by researcher Kelly Stewart, who was working with Dian Fossey at Karisoke at the time. Unfortunately, Titus faced numerous upheavals as a youngster, including the loss of significant family members to poachers and the subsequent disintegration of his natal group.
Following these losses, Titus became part of an all-male group, at just age 5. Eventually the group attracted some females, and after the dominant silverback of the time (named Beetsme) began to age, Titus eventually took over leadership and successfully sired numerous offspring. Now, Titus himself is quite elderly, has faced his own leadership challenges, and has seen his group start to dwindle. In fact, his son, Kuryama, has taken a part of the group and moved on as his own leader. 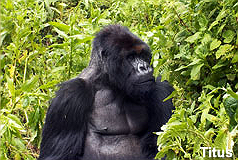 This unusual and well-documented life is the subject of a new television special called “The Gorilla King” which will air nationally on PBS stations on April 20, as part of Thirteen/WNET New York’s NATURE series. The documentary was made by U.K-based Tigress Productions and will also air later in the year on the BBC network. The high-definition cameras used by Tigress have created very vivid and detailed footage, capturing some amazing moments of gorilla life. 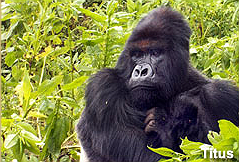 “The Gorilla King” features current Karisoke staffers Veronica Vecellio (who writes many of our Gorilla eNews updates) and Felix Ndagijimana, as well as numerous scientists who observed Titus in his earlier years. Many other Karisoke and Fossey Fund staff also helped in all aspects of the film, including the research and filming.
The story of Titus is really “an epic soap opera,” says Fred Kaufman, executive producer of the NATURE series. “Titus gives us the opportunity to present something more than just the behavior of an anonymous group of animals. Here we have the other layer of the story, the background, the social structure, the politics. It’s rare to be able to get this kind of rich history,” Kaufman says.