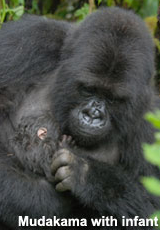 Mountain gorilla Mudakama gave birth to her third infant on August 20, 2009. The birth increased the current size of Pablo’s group to 46 individuals and it maintains the primacy of being the largest known group of mountain gorillas. Pablo’s group, named after a former silverback leader, is one of the mountain gorilla groups that our staff at the Karisoke Research Center has monitored since its formation. It once reached a high of 65 members!

It has been five years since the birth of Mudakama’s previous infant, Agahozo. This is a long inter-birth interval for a mountain gorilla female, considering the expected interval of 3.5-4 years between successive births.

Mudakama is a 22-year-old female who was born in Susa’s group, one of the groups of mountain gorillas monitored by the Rwandan Development Board (RDB/ORTPN). She transferred to Pablo’s group in 1995 when she was 9. She had her first infant, Bikereri, a year after the transfer. After that, there was an unusually long gap of 8 years before her second infant, Agahozo, was born. 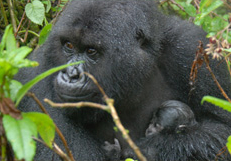 Mudakama has always been a central female in the group, and is surrounded by many family members. Even though Mudakama has an inferior rank compared to many of the other females in the group, she has gained the respect of many group members including Cantsbee (the dominant silverback) and Pablo (a silverback who has since died).

Her position probably benefitted from that of her mother Cyiza, who was the oldest member of the group before transferring recently to a new group. In addition, Mudakama’s shift from one part of the group to another encouraged the development of very good relationships with other group members. It was common to see Mudakama close to the second-ranking male Pablo before his disappearance and death, as well to see her among the large harem of the dominant silverback Cantsbee.

Due to this confident mother, the newborn will have the opportunity to interact with many gorillas in the group and learn quickly how to become independent. Oldest sister Bikereri is a mother herself and will help in the growth of the new family member. Oldest brother Agahozo and cousin Ingufu will also participate in the exciting life of the youngest member of Pablo’s group.