Another Gorilla Infant Freed From Snare

For the second time this year, an infant gorilla residing in one of the mountain gorilla groups we monitor in Rwanda became trapped in a snare set by poachers. And once again, the youngster was rescued by our staff at the Karisoke Research Center. The area used by this group, named after silverback leader Ugenda, has in the past four months been targeted frequently by local hunters, a fact that raises concerns, since it is the core home range of the gorilla groups we monitor. 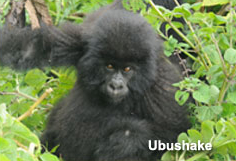 This latest episode occurred when Ugenda’s group was in the bamboo zone of the Kazi area. In the morning, 2-year-old infant gorilla Ubushake got his right wrist caught in a common type of antelope trap, made from a rope and a bent bamboo branch. Ubushake started screaming loudly while holding onto the bamboo branch. His mother, Kanama, who was nearby, tried to free the infant by pulling him away from the branch. His grandmother, Kubyina, and dominant silverback Ugenda did the same thing. All the gorillas were extremely stressed at this point and were making loud vocalizations.

Our trackers, led by Jean Damascene Hategekimana, were monitoring the group at the time and agreed that they would have to intervene. First they chased the other gorillas away from the site in order to approach the infant. This attempt was successful and all group members including mother Kanama moved 100 meters away, but when the trackers were ready to free the infant an unexpected thing happened. Lone silverback Gwiza appeared and began moving quickly toward Ubushake. Gwiza then pulled Ubushake’s arm aggressively and the infant started screaming loudly, probably hurt by the silverback’s strength. Gwiza continued this for two minutes, when the trackers decided to intervene. They proceeded to chase Gwiza away, by waving sticks and using loud voices, which caused the silverback to move just a few meters away, though he continued to walk around the site. At the same time, another silverback, Urugamba (a subordinate silverback in Ugenda’s group) came up charging and displaying and started to chase Gwiza. This action was effective, and Gwiza then moved away from the site, followed by Urugamba, who pushed him some 300 meters away.

At this point, the trackers were finally alone with Ubushake, and worked quickly to free him from the snare. Hategekimana used his jacket to cover the infant’s head as they worked. Ubushake was exhausted and had stopped screaming, but he still held onto the branch, with his eyes closed from fatigue and stress.

Hategekimana cut the rope, and the infant was finally free to run away toward the rest of the group. Limping with his sore arm, he reached his mother, who came toward him and immediately put her son on her back, giving him some rest. At the same time, Urugamba came back in the group after having chased silverback Gwiza away. The trackers decided to leave after verifying that all the gorillas were fine and accounted for. On the following day Ubushake was observed using both arms normally again. 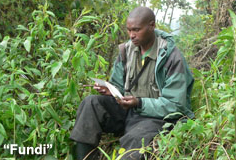 Thanks to the braveness of Jean Damascene Hategekimana, better known by his nickname “Fundi,” the episode did not have serious consequences. Since 1993 Fundi has worked for Karisoke as a tracker in Shinda’s gorilla group, which recently split into Ugenda and Ntambara’s groups. His knowledge of gorilla behavior and his experience fighting illegal activities in the park makes him an exceptional member of the gorilla conservation team.

After the event, our anti-poaching team decided to reinforce the patrol of the area and more snares were found on the following days. They then decided to set an ambush close to two fresh snares with the aim of catching the illegal hunters. Our team started in the early afternoon and divided in two groups to monitor both snare sites, hiding themselves and waiting patiently until dusk. This was repeated for several days until finally a poacher was seen moving toward a buffalo snare. The anti-poaching trackers shot in the air and ran after the poacher until they caught him. The poacher was immediately transferred to the police and arrested. He confessed to having set some of the snares in the area and to being a poacher for a long time; this was his second arrest. Further discussions among park managers and Karisoke staff are now underway to decide upon efficient strategies to enhance park protection.