Bon Voyage to Ndeze and Ndakasi! 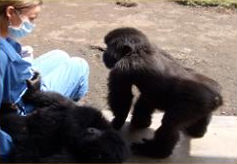 Ndeze and Ndakasi are two of four rescued mountain gorilla orphans that the Dian Fossey Gorilla Fund has provided specialist care for over the last several years. The four are currently the only mountain gorillas to have ever successfully survived in captivity.

In 2007, the world was shocked by the horrific massacre of two entire mountain gorilla families in the Democratic Republic of Congo. This was clearly no ordinary killing performed by regular poachers, since no flesh was taken for consumption, no body parts were taken for trophies, and most telling of all was that two young gorilla infants were found clinging to their dead mothers’ bodies – Ndeze and Ndakasi. Normally, poachers would take the young infants and try to sell them. Ndeze and Ndakasi were rescued instead by Congolese authorities.

Since the horrific massacre of their families, Ndeze and Ndakasi have been safely housed in Fossey Fund facilities in Goma. Initially, they needed significant medical attention, provided by the Mountain Gorilla Veterinary Project, as well as round-the-clock caretakers, provided by the Fossey Fund, since Ndeze was just 5 months old at the time and Ndakasi was barely 3 months old.

Once both gorillas regained good health it was up to the Fossey Fund, with more than 40 years of gorilla behavior research, to train Congolese rangers on how to be good gorilla caretakers. Each caretaker would have to learn how to display appropriate gorilla behavior and vocalizations, and how to feed and care for the infants, ensuring that each orphan received the attention, affection, discipline and protection that a real gorilla mother would display for her baby.

As they grew older, Fossey Fund staff built special structures for them to exercise and play on and provided them with freshly collected foods from the forest. Now, two and a half years later, Ndeze and Ndakasi have not only grown in size and strength, but also in confidence and independence, and their location in our facility in the busy town of Goma became less than ideal.

So with special funding donated to ICCN, a new environment has been set up for Ndeze and Ndakasi on the edge of their original forest home. With many trees to climb and natural vegetation to eat, both infants will be able to explore and play just as their wild relatives do. They were moved to their new location on December 1 and all went smoothly. Sandy Jones, the Fossey Fund’s Orphan Gorilla Rehabilitation Manager, will stay near them in their new facility for several days.

It is with mixed emotions that the staff of the Dian Fossey Gorilla Fund bid Ndeze and Ndakasi a bon voyage. We wish them happiness and success in their new home!

Still under our care are the other two young mountain gorillas – Maisha, a beautiful female who is now 8 years old, and Kaboko, a boisterous male of 5 years. They live with a group of six rescued Grauer’s (eastern lowland) gorillas in facilities in Kinigi, Rwanda, funded largely by a grant from the U.S. Fish & Wildlife Service.

The Fossey Fund, in partnership with ICCN, Pan African Sanctuary Alliance, Disney’s Worldwide Conservation Fund and Animal Kingdom experts, is also in the process of constructing a new center for the rehabilitation of rescued gorillas in a large forested area near Congo’s Tayna Nature Reserve. The Gorilla Rehabilitation and Conservation Education (GRACE) center, built with funds from the U.S. Fish and Wildlife Service’s International Conservation Division, is scheduled to be completed by the middle of next year. The plan is for this new facility to act like a school for orphan gorillas, providing them with the chance to learn the appropriate skills and unique gorilla etiquette that are required to survive in the wild. When the individuals have achieved this level of knowledge we hope to be able to re-release them to the wild, to once again live freely and contribute to the wild gorilla population.