For nearly 50 years, field staff of the Dian Fossey Gorilla Fund have been studying and monitoring gorillas in the forests of Rwanda, and now in eastern Congo as well, spending  thousands of hours in the field each year collecting information on the gorillas, including important data on their behaviors, social interactions, movements, health and daily activities.

Until recently, all of this information was collected using pencils and paper notebooks, and then painstakingly transferred to computers. In the case of Dian Fossey, this was done on a manual typewriter. Now all of that has changed, with the development of a unique new app, called “Animal Observer.”

With support from collaborating funder Oracle, Fossey Fund scientist Damien Caillaud, DVM, Ph.D., began working on developing this app three years ago. He explains that most software packages already on the market for data collection were very general and were not designed to collect information on animals in field settings.

“Wild animals can move fast and do things fast, so we need to record data really quickly,” says Caillaud. “The other software available were too cumbersome for use in the field.”

Thus was born the idea of a brand new iPad app just for collecting information on animal behavior: Animal Observer, which the Fossey Fund is now using daily to study social behaviors and activity budgets, and to monitor the health of the animals.

“This app allows you to know about who gets along with whom, who doesn’t associate with whom, and what the overall social network of the animals in the group looks like,” says Caillaud. 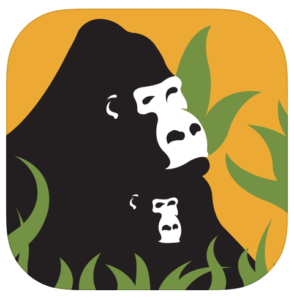 The Animal Observer app can also do a lot of other things, such as collect photos, videos and audio recordings, and of course it is GPS enabled, so all the collected data can subsequently be placed on a map. In addition, the data collected through the app avoid some of the problems that occur with pencil and paper, and prevents mistakes like typos, incorrect dates and times, and transcription errors. And, finally, the data can be exported to a database right away, rather than requiring manual entry from notebooks.

The Animal Observer app (now available free in the Apple app store) is designed so that it can be customized for use with other animals, from lizards to birds to orca whales. It is especially useful for studying social networks, and can also be used to monitor and collect health data. Several research groups elsewhere in Africa are already using the app, says Caillaud, collecting information on western gorillas and on chimpanzees, and it can also be used in schools, or by anyone interested in trying it out.

The Animal Observer app for iPad, developed by the Fossey Fund, is available free in the Apple app store. It can be used by scientists, teachers, or anyone interested in trying it out. There is a built-in gorilla study protocol in the app, so new users can start using it right away.

The Fossey Fund thanks major collaborating funder Oracle for support in development of the Animal Observer app.