Forty years ago, Dian Fossey and the world were devastated when a family of mountain gorillas — named Group 4 — was decimated by poachers. Group 4 was the very first group of gorillas to be studied by Dr. Fossey after she established the Karisoke Research Center and included individuals like Uncle Bert, who she named after her own uncle, and Digit, the first gorilla to accept her presence.  Over the course of 1978, four gorillas in Group 4 were killed by poachers and another three died as a result of the group’s disruption.  By December of that year, only three of the original 11 group members remained together.

With her beloved Group 4 destroyed, and the mountain gorilla population headed toward a low point of only about 240 individuals, Fossey feared the species would go extinct before the year 2000.

Instead, today, due to the intensive protection efforts Fossey initiated, mountain gorillas have reached a new historic milestone: their numbers have gradually increased over the past 30 years, and are up from 240 to 604, based on the latest census. (Another separate population of 400 individuals bring the total number of mountain gorillas to just over 1,000).

As a result, their official status has just been re-classified, from “critically endangered” — the highest level of threat — to “endangered,” moving them a level further from extinction.

“This is a remarkable and unique conservation success story,” says Fossey Fund President and CEO/Chief Scientist Dr. Tara Stoinski. “It is the result of decades of on-the-ground protection by hundreds of dedicated individuals, many of whom lost their lives to protect the gorillas, and a testament to the conservation efforts of the governments of Rwanda, Uganda and the Democratic Republic of Congo where these gorillas live.”

It is also an important reminder to the global community of the amount of effort that is needed to save a species.  “Mountain gorillas have experienced some of the highest levels of protection of any animal — more than 20 times the global average of field staff per square kilometer. This is the type of extreme conservation required if we want to ensure a future for wildlife,” adds Dr. Stoinski.

The latest assessment is published by the International Union for Conservation of Nature (IUCN) – the international organization that tracks the conservation status of animal and plant species around the world – based on the input of expert scientists. Unfortunately, the status of all other gorilla populations remains at critically endangered, due to steady ongoing declines. 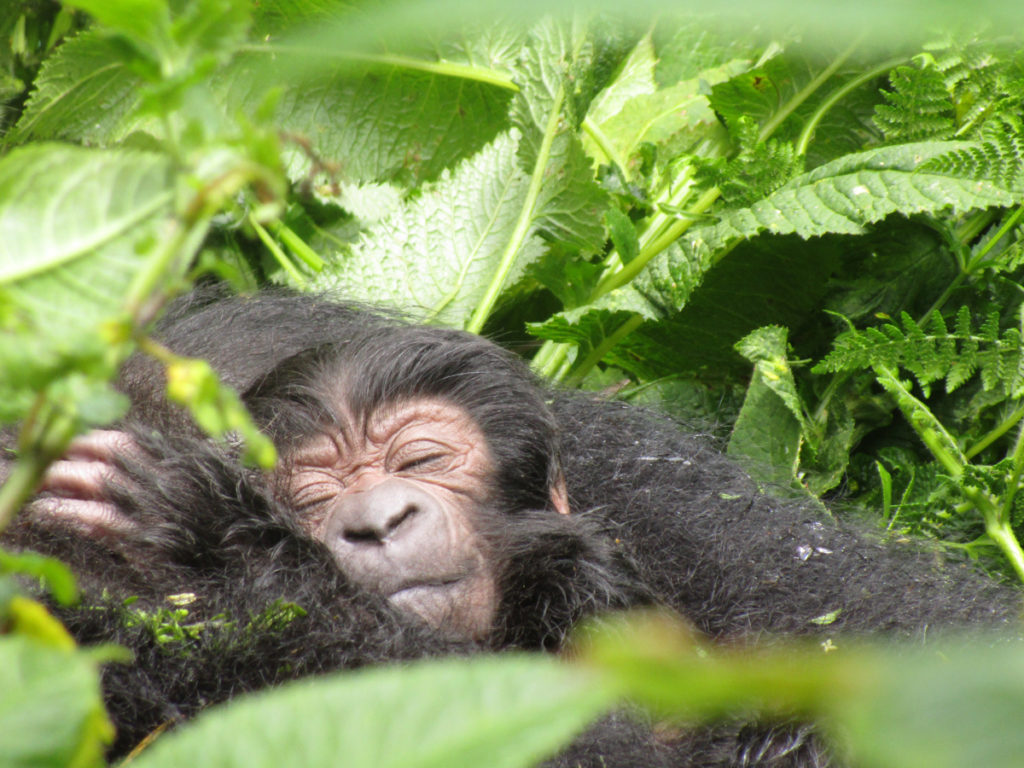 The Fossey Fund’s Dr. Stoinski was on the scientific team that wrote the re-assessment report, and says that it is important to remember that despite this positive signal, significant threats to the mountain gorillas remain, including limited habitat (only about 300 square miles in total, or about one fourth the size of Rhode Island), disease, human pressures, climate change, and their overall small number. “They remain a conservation-dependent species and must be continually protected,” says Dr. Stoinski. “Any one of these threats could change their status very quickly.”

Sigourney Weaver, who portrayed Fossey in the movie version of Fossey’s book “Gorillas in the Mist,” has served as honorary chair of the Fossey Fund for more than 30 years. “When we filmed the movie, just after Dian’s murder, the magnificent mountain gorillas were at such a low point and very close to extinction,” she says. “Like Dian, we all feared for their future.” 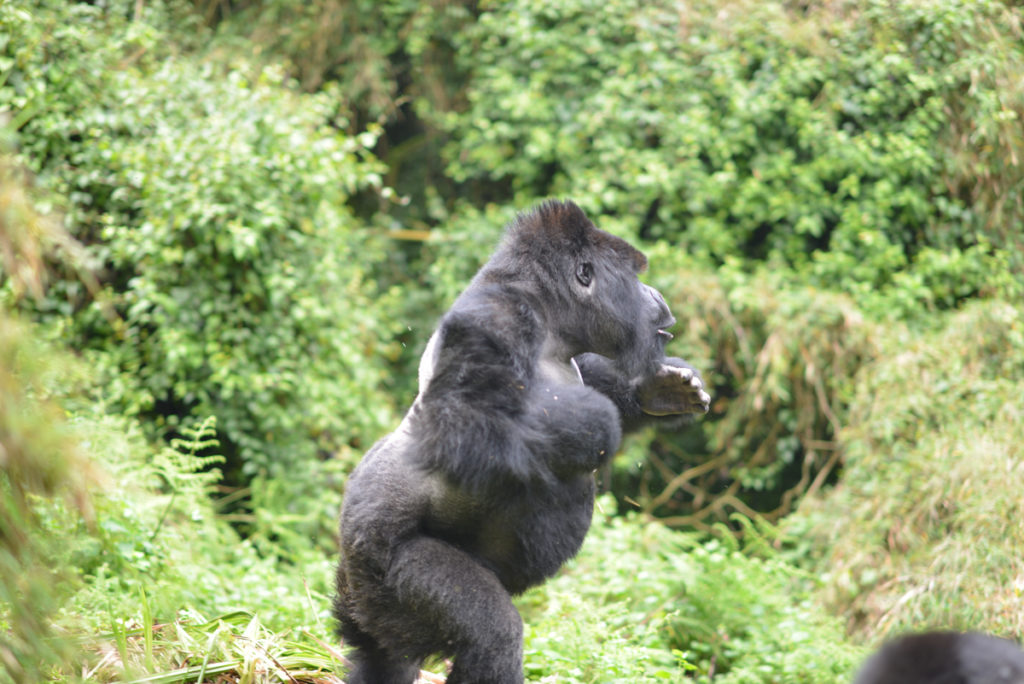 “Yet Dian’s legacy and the long-term protection she started have led to continued growth in their population.  All of us at the Fossey Fund celebrate this conservation success story, which is such a rarity.  But we also realize that with so few mountain gorillas left and so many ongoing threats to their survival, conservation efforts must continue,” Weaver adds.

“We are proud to be part of this international effort to save the world’s remaining mountain gorillas,” says Felix Ndagijimana, director of the Fossey Fund’s Rwanda programs and Karisoke Research Center.  “It is a great example of collaboration between governments, conservation organizations like the Fossey Fund, and local communities, and we remain committed to supporting the efforts of the Rwandan government to preserve its biological heritage.”

The Fossey Fund has also exported its successful model of conservation — which includes direct protection, scientific research, and community-based initiatives aimed at improving the lives of local human populations — to the nearby Grauer’s gorillas in the Democratic Republic of Congo, where the situation is dire.  An estimated nearly 80% of Grauer’s gorillas have been killed in the last 20 years, leading them to be considered one of the world’s 25 most-endangered primates.

How does IUCN determine the status of a species?
The same criteria are used for all species, which can make reassessment challenging as, for example, a mouse has very different biological parameters than a gorilla. But using the same criteria enables objectivity across species.  Re-assessments are done on a regular schedule,  though additional assessments can be added if needed. A team of scientific experts with specific experience in each species writes a report with recommendations about the latest situation of that species. For the mountain gorillas, the assessment team included individuals

There are a variety of criteria for determining the current status of a species, including total numbers, rate of decline, and certain aspects of their geographic area.

What were the major factors in setting the new status for the mountain gorillas?
In the past, mountain gorillas were ranked as critically endangered due to their very small population size (fewer than 250 mature individuals, which is the criteria for critically endangered), high levels of threats, and declining numbers.  With the population slowly but consistently increasing over the last few decade and now at an estimated 600 mature individuals, they were reclassified as endangered.

Is there enough forest area for continued expansion of the mountain gorillas?
It is not clear yet exactly how many mountain gorillas can be accommodated within their limited geographic range, but there is probably room for some additional expansion, though this can create new challenges for them. Their habitat is only about 300 square miles.

Why are other types of gorillas still listed as critically endangered?
Grauer’s gorillas, which live only in the Democratic Republic of Congo, have seen nearly an 80 percent decline in recent decades. Cross River gorillas are a tiny population of only several hundred. Western lowland gorillas have the largest population and the biggest range, but their numbers are estimated to be declining as well. Ebola has also affected western lowland gorilla numbers.

Click here to support the successful work of the Dian Fossey Gorilla Fund!