Opportunities to closely observe endangered Grauer’s gorillas (found only in the Democratic Republic of Congo) are limited, because there is only one group that is fully habituated to the presence of humans (and one additional group in the process of being habituated). These two groups are located in Congo’s Kahuzi-Biega National Park, which is protected by Congolese wildlife authorities (ICCN).

Fossey Fund scientist Amy Porter, Ph.D., recently began collecting data on these groups, studying their behaviors, personalities and activities by observing them every day, as we do with the mountain gorilla groups in Rwanda. Some days, not all the gorillas of the group are seen, having spread out some distance or being hidden in thick vegetation. But when several days pass without seeing any particular member of the group, extra effort is put into locating them. 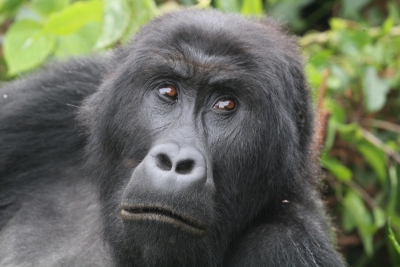 This happened recently when five group members were not seen for about a week, including one that Dr. Porter had been observing closely – a blackback named Nabanga. Despite hours of targeted searching, two more weeks passed without finding them, until one day, there was Nabanga, and three of the others, feeding on leaves and fruit near the group again. A few of them had wounds or scars, suggesting they had run into some “adventures” with unhabituated gorillas somewhere, and the female did not return at all, probably having transferred to another group.

“We wonder whether Nabanga and the others will stay with the group or if some or all of them will go off on another adventure. Selfishly, I hope Nabanga sticks around, because his beautiful, calm presence is so very special.”