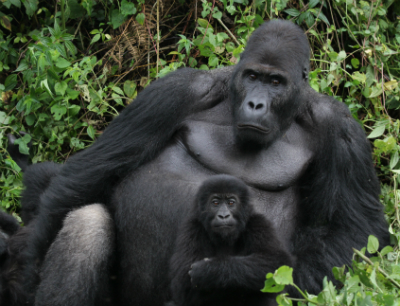 In April, the Fossey Fund began work at a new field site in the high-altitude sector of Kahuzi-Biega National Park (KBNP) in eastern Democratic Republic of Congo (DRC). Kahuzi-Biega is the Fossey Fund’s third location for a long-term research and conservation program, along with the Karisoke Research Center in Rwanda and the Nkuba-Biruwe Research and Conservation Base in the low-altitude forest of eastern DRC. The new program was granted permission by the Congolese Institute for Nature Conservation (ICCN) at the end of 2013 and we began collecting data during April 2014. Funding to initiate this study was provided by the Margot Marsh Biodiversity Foundation.

KBNP hosts the only habituated group of Grauer’s (eastern lowland) gorillas. Researchers have been able to track and gather data about Grauer’s gorillas from afar at other research sites but only through nest sites, dung, food remains or using camera traps. This information has been a great resource for conservation by providing pertinent insights into habitat requirements, diets, ranging patterns, and genetics. However, to further advance conservation efforts, the Fossey Fund wanted to be able to directly observe the behavior of the Grauer’s gorillas, as we have done with mountain gorillas at Karisoke for 47 years.

Last year, Fossey Fund’s Congo Research and Conservation Program leaders Urbain Ngobobo (DR Congo Program director) and Damien Caillaud (DVM, Ph.D., Grauer’s Gorilla Research Program director) approached the director of KBNP, Mr. Radar Nishuli, and proposed to set up a research program focusing on the study of Grauer’s gorilla demography, ecology and social behavior, similar to our Karisoke research program. Mr. Nishuli was very supportive, approved the proposal, and the Fossey Fund became a partner of the park in the field of gorilla research and monitoring. Caillaud describes Nishuli as a highly dedicated conservationist, despite constant dangers and threats to his life.

When Caillaud and Ngobobo arrived at KBNP this spring, they were warmly welcomed by the park’s trackers, tourist guides and scientists. Fossey staff and park guides used the same strategy and technology implemented at Karisoke to begin in-depth studies of Grauer’s gorillas’ behavior. Karisoke's Protection and Monitoring Officer Jean Paul Hirwa visited KBNP in April to lead a week-long training on Cybertracker, the tracking software package Karisoke has used during the past year.

“The importance of this new technology is that it will limit mistakes that could be made while collecting and entering data manually,” Hirwa said. “Also, the data will be downloaded automatically from the devices and be available to be analyzed and reported much quicker, thus facilitating everyone who wants to study behavioral ecology of gorillas with available means.” 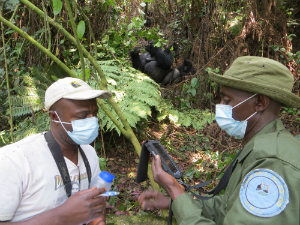 Caillaud and Ngobobo collaborated with KBNP guides and monitoring teams to implement behavior data collection protocols in the habituated gorilla group. They also worked with KBNP’s head of guides Lambert Cirimwami and Gorilla Doctors’ veterinarian Eddy Syaluha to photograph and identify all 25 members of the group. Cirimwami took on the task of collecting behavior data using Cybertracker and uploading the data once he returns from the field. “The collaboration between ICCN guides and trackers and the Fossey Fund has been instrumental to the success of the research thus far,” Caillaud said.

This study group of Grauer’s gorillas is led by one male silverback named Chimanuka. The 28-year-old is the only adult male in his group. A total of six adult females, six infants and 12 additional young gorillas were identified. Chimanuka often interacts with the infants; a year ago, he even adopted a 1-year-old infant, Marhale, following the death of his mother. Without his father’s care, Marhale would certainly have died.

Unlike the mountain gorillas in the Virunga volcanoes, Grauer’s gorillas do not have unique nose patterns. These patterns are used by field staff as key identifiers of gorillas, so instead, other areas of classification—ears, eyelids, wrinkles, scars—serve as distinctive features for the Grauer’s. Sadly, two of the members of Chimanuka’s group have missing hands, likely from snares, which are clear distinguishing features and powerful reminders of why gorilla conservation is crucial in DRC.

Chimanuka’s group lives in the high-altitude sector of KBNP at an elevation of about 2, 200 meters. The forest is afromontane, similar to the forest found in some areas of mountain gorillas’ range, but very different from the low-altitude forests found at our other Grauer’s field site (Nkuba-Biruwe). In the Nkuba-Biruwe forest, the altitude is only 600-800 meters, temperature and humidity are much higher, and the forest has a lot more fruit trees. For this reason, Caillaud expects to find important differences between Chimanuka’s group’s behavior and the behavior of Grauer’s gorillas from Nkuba-Biruwe.

Caillaud describes the initial research phase and training as very successful. He remarked on his satisfaction with the fulfilling the objectives he and Ngobobo set out to complete during their time at Kahuzi-Biega.

The next step of the program will be to continue to collect data, keep building the research capacity of the park and eventually migrate the information to an online database accessible to the park managers. Ngobobo and Caillaud also mentioned their hopes that Congolese undergraduate students from Bukavu University would train at KBNP.