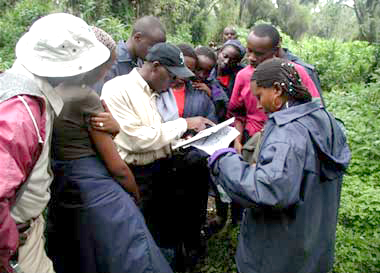 The Disney Wildlife Conservation Fund (DWCF) recently made a significant grant to DFGFI to support conservation capacity building in Rwanda. Disney helps make it possible for DFGFI's Karisoke Research Center (KRC) staff to develop and offer training programs for University of Rwanda students interested in the conservation of their own country's natural resources.
The high level of training offered by KRC is greatly valued, as all recent graduates have been employed by government research and teaching institutions and to fill the new positions of park research and monitoring wardens.
Disney's commitment to capacity building is visionary. In a country with such a dense human population as Rwanda, preserving biodiversity depends on three small national parks. Having the personnel to effectively manage these resources in a sustainable manner is essential for the long-term conservation of the mountain gorilla and other biodiversity in Rwanda.
In the past eight years, the DWCF has supported more than 450 projects worldwide, at a total of $8.5 million. Kim Sams, manager of Conservation Initiatives for Walt Disney World applauds DFGFI efforts. "We have been involved with DFGFI for several years and have great regard for the work they are accomplishing,” she says.
“The Disney Wildlife Conservation fund allows us to take Walt Disney's long legacy with animals further, not only sharing animals with people through Disney's Animal Kingdom (theme park in Florida), but also sharing funds with animals all over the world to make sure they are taken care of, understood to the best of our ability, and protected for the future."
To learn more about the Disney Wildlife Conservation Fund, please visit www.disneywildlife fund.com.