What was the experience like shooting the scenes in “Gorillas in the Mist,” in which you played the role of Dian Fossey and worked with actual gorillas? 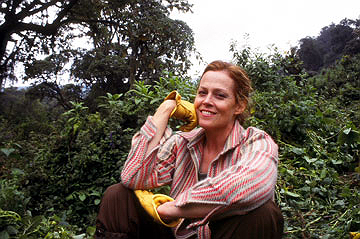 “The truth is I didn't really know how I would react to the gorillas, I had no experience with wild animals. But, I knew that in order to play the part [of Dian Fossey], which I wanted very much to do, and in order to get Dian's message out, there was no time for me to worry about what was going to happen. I remember I was pretty excited when we finally reached a place with gorillas. The first time you see the [mountain gorillas] you feel so blessed, you feel like you're in Eden. One of them, a little female named Josie, came right over and sat next to me. She kind of leaned on me and looked up at me. I was just captivated. I never looked back after that. I always felt that if I followed Dian's basic rules of being submissive and quiet, not drawing attention to myself and being respectful, nothing would ever happen to me.”

What impact did shooting “Gorillas in the Mist” have on you?

“After spending so much time with the mountain gorillas in Rwanda and playing Dian, I felt that I had been given a gift. It's appropriate that I try to do whatever I can to help protect them.”

[Sigourney Weaver has served as Honorary Chair of the Dian Fossey Gorilla Fund International (DFGFI) for nearly 16 years, following her playing the role of Dian Fossey in “Gorillas in the Mist.” DFGFI is the organization founded by Dian Fossey that is dedicated to the conservation and protection of gorillas and their habitats in Africa, through research, conservation action, education, and partnerships.]

“I think actually being with the gorillas made me want to be a mother. Playing Dian, I would usually have several little baby gorillas jumping up and down on me, pulling my hair, urinating on me, grabbing my bag…. And I had so much fun with them, and I loved them so much; I remember thinking, 'I would really like to be a mother!' I got hooked on being a surrogate mother, roughing it in the hills of Rwanda, and I had my daughter pretty soon after that.”

[At the time of filming "Gorillas in the Mist" it was not uncommon for humans to come into direct contact with gorillas. Since that time, the conservation and scientific communities, as well as the Rwandan government, have agreed that human contact endangers the safety of gorillas. A 25-foot rule was established and DFGFI trackers and anti-poaching patrols do all that they can to avoid touching gorillas.]

How did “Gorillas Revisited” come about?

“DETERMINATION. [Filming“Gorillas Revisited,” produced by the BBC and aired in the U.S. on Animal Planet] was my first trip back to Rwanda to visit the gorillas since playing Dian in "Gorillas in the Mist." The producers and I were on a mission to explore the legacy left by Dr. Fossey…. Her work truly lives on there. It's evident not only in the growing gorilla population, but also in the passion of the people there–saving these magnificent animals.” 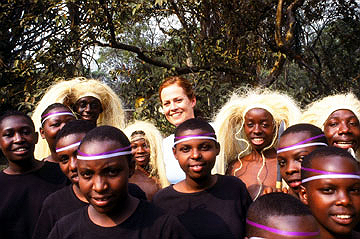 “I had wanted very much to go back with DFGFI a number of times but because of the civil war the trip was always postponed. I thought the BBC would do a good job — they had a lot of experience with wildlife documentaries. I felt it was extremely important not to let any more time go by. I wanted to see for myself how the gorillas were doing — to see how Rwanda was doing. We were not there for Rwanda during genocide and we owe it to them to do whatever we can now. It is such a beautiful country and the people have been through so much. We need to rally round them.”

What was it like returning to Rwanda after all that time and seeing the gorillas again?

“One of the things that impressed me most was the dedication of the Rwandans and all the international researchers and other staff members in the field, and how every penny was going toward equipment and programs that are directly responsible for how well the gorillas are doing. Dian was afraid that after this many years there might not be any left. I am happy to say that the numbers are encouraging. They'll never be completely safe, but I think if we are vigilant, we can keep these small communities healthy.”

“The good news is that the gorilla group that I spent months with, Study Group Five, has doubled in size and there are many more young blackbacks, who are the future silverbacks. Tourism is much more established, and very strong rules have been set in place. For instance, you must stay 25 feet away from the gorillas, and you can only be with them for an hour. On the other hand, the Rwandan community has been decimated by genocide, and they are still, in a sense, reeling from that upheaval. But, I was very encouraged by the talks I had with people I knew from before and the people I just met… It's a peaceful place now. It's a safe place to visit, and since the gorilla's future is intertwined with Rwanda's, we're hoping that Rwanda will continue to stabilize and prosper.”

What would you like people to take away from Gorillas Revisited?

“Dian Fossey's greatest legacy is that she introduced people to these magnificent animals who are closer to us than any other animal; 97 percent of our DNA is shared with gorillas. She was so outspoken and single-minded that she not only created the Dian Fossey Gorilla Fund International, but also the awareness around the world that no time can be lost in coming to rescue and protect these beautiful animals.”