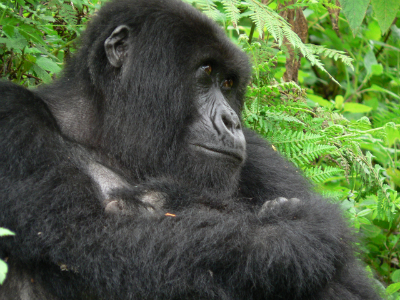 Gorilla behavior is sometimes unpredictable and may not have a clear explanation. Such is the case when females travel alone with their infants outside the group for several days. Potential risks are many, especially for the young gorilla, who can easily fall victim to infanticide from a solitary male or a male from another group.

Umusatsi is an experienced 27-year-old female gorilla from Kuryama’s group. Her last offspring, Rwema, is a juvenile male just 3 and 1/2 years old. In the past month, researchers often observed Umusatsi copulating with dominant silverback Kuryama, a fact that suggests that she may be in the fertile period called estrous. It is indeed the right time for Umusatsi to be ready for her next offspring, because Rwema is now totally weaned. Her ovulation period may explain the extreme decision she recently took to move out of the group, maybe hoping for new mating partners with outside males, but it still remains unclear why she risked the life of her juvenile infant Rwema, who understandably preferred to tag along with his mother rather than safely remaining in the group.

Umusatsi and Rwema were not in Kuryama’s group on May 22 and there was evidence that they did not spend the night with the group. On the same day, trackers luckily met her on their way home, at about one kilometer from the end of the park. After that, the Karisoke™ field staff were able to locate her on the four following days and know exactly how long she travelled and how far she was from the group. 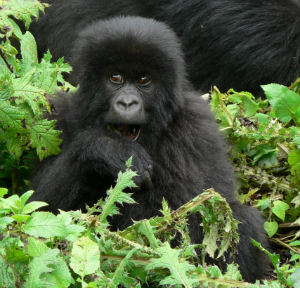 The staff’s concern for Umusatsi’s and Rwema’s safety was raised on May 25 when a severe interaction occurred between Isabukuru’s group and Kuryama’s group. On that day Umusatsi was about 800 meters from the interaction site, but at any time she could have been reached by silverbacks from Isabukuru’s group.

Once again the three silverbacks of Kuryama’s group succeeded in protecting their group, facing the outsider males with courage and a strong physical presence. Isabukuru and the second silverback of his group, Kubaha, were extremely motivated to make their challenge. They followed Kuryama’s group and solicited physical fights during more than four exhausting hours of interaction.

Kuryama, Kirahure and Vuba formed a barrier to protect the females and infants. Many injuries were visible on all the males as result of the encounter.

On the following day, while the silverbacks from Kuryama’s group were still licking their wounds, Umusatsi and Rwema reappeared, rejoining the group during the resting period. They all looked exhausted and surprisingly nobody paid much attention to her, as though nothing had ever happened. However, on June 15, the day after another interaction in which the silverbacks Kubaha and Kirahure were again wounded, Umusatsi and Rwema were nowhere to be found and five days later had not yet reappeared. 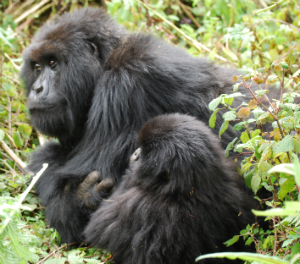 This is the fourth time that Umusatsi has been alone for several days without an apparent explanation. Certainly, she demonstrated a deep knowledge of the forest and a great deal of confidence in choosing to be alone for so long.