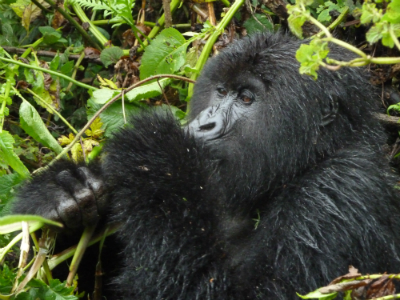 Bishushwe has now gained a central position in Ntambara’s group, as dominant Ugutsinda has taken her under his “custody.” Indeed, today she she spent most of the time with the silverback, with whom she exchanged several bonding behaviours such as grooming and resting in physical contact. Among the other individuals in the group, female Tegereza and juvenile Igisubizo (Bishushwe’s son) are the closest to Bishushwe.

Female Kunga initiates most of the antagonistic behaviors toward Bishushwe, who, despite being older, reacts submissively. This is possibly due to the fact that Kunga’s mother, Kubaka, has the highest rank among the females in Ntambara’s group, so it is better to be submissive to avoid trouble.

Interestingly, we have not observed any copulation with Bishushwe since she transferred two months ago. In addition, she was not involved in any dominance-related behavior such as displacements with other females.

We can say that, even if she appears to be well integrated in the group, Bishushwe seems to have chosen a peaceful attitude rather than getting involved in dominance or sexual struggles to raise her rank.