At the annual Dian Fossey Circle luncheon Oct. 13 in New York City, the long career of Clare Richardson as Fossey Fund president and CEO was celebrated, along with presentations by other Fossey leaders, field staff and scientists. Honorary Chair Sigourney Weaver presided over the luncheon, which is a benefit for members and sponsors at the Dian Fossey Circle membership level and above.

Sigourney Weaver spoke about her memories with Maggie, a gorilla who has been prominent in Fossey Fund news lately, for leading Bwenge’s group after the silverback’s unexpected death Oct. 1. Weaver described Maggie’s interesting behaviors while she was in Rwanda filming Gorillas in the Mist. 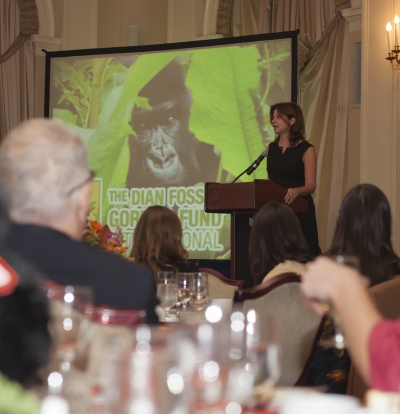 “It’s great to reconnect with Sigourney and to hear her stories about Maggie,” said new Fossey Fund President and CEO Tara Stoinski, Ph.D. “I think it speaks to the uniqueness and longevity of our organization that we can share stories from the past about individual gorillas and add new ones today.”

The luncheon, which has historically been held at the prestigious Yale Club, included about 120 guests. Dr. Stoinski and board vice chair Joanne Truffelman, led the commemoration of Richardson’s 19 years with the Fossey Fund, including a video and presentation of special gifts, such as a painting by Zoo Atlanta gorilla Willie B., Jr.

The presentations by staff included updates on the Karisoke gorillas by Gorilla Program Coordinator Veronica Vecellio and Felix Ndagijimana, who leads the Fossey Fund’s Rwanda programs, as well as information on the Fossey Fund’s work with Grauer’s gorillas in Congo, presented by Fossey Fund scientist Damien Caillaud, DVM, Ph.D. These were followed by a lively question-and-answer session and a statement from Sigourney Weaver thanking guests for joining her in the quest to save gorillas.

To learn more about becoming a member of the Dian Fossey Circle, click here: