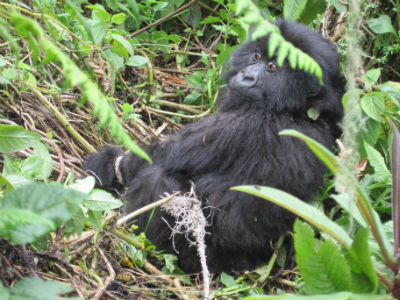 Snares are one of the ongoing threats to mountain gorillas and the Dian Fossey Gorilla Fund is on the ground every day with anti-poaching and gorilla monitoring teams. Unfortunately, gorillas still get caught in snares, and on Sept. 6, our trackers discovered an infant in Bwenge’s group (one of the gorilla groups we monitor in Rwanda’s Volcanoes National Park) caught in a snare. Two-year-old Susuruka must have encountered the snare in the morning and was hanging from the bamboo stake when trackers discovered her. They cut the rope to free her, but the rope that encircled her wrist still remained.

The Fossey Fund and its partners, the Rwanda Development Board (RDB, park management) and Gorilla Doctors, prepared to stage an intervention to remove the snare, but waited 24 hours to give the infant and her mother a chance to remove it themselves, since the infant did not appear in critical danger. It is generally much less stressful if gorillas can remove the rope themselves rather than staging an intervention, which requires sedating the infant, and often its mother, and keeping the rest of the group at bay.

Unfortunately, Susuruka still had the snare around her wrist the next morning, and the team went ahead with the intervention. Veterinarians Dawn Zimmerman and Jean Bosco Noheri (Gorilla Doctors) and Elisabeth Nyirakaragire (RDB) sedated both the infant and her mother, Faida, and cut the rope from the infant’s wrist, checking to see if it had caused any serious injury to the hand or arm.

Meanwhile, the Fossey Fund’s field staff kept the group from interfering. Gorilla Program Manager Veronica Vecellio reported: “Fossey Fund trackers led by Fundi, who is by far the best of our field staff and the most experienced in gorilla interventions, made sure silverback Bwenge was far enough from the vets. Bwenge did great and was calm.” Fortunately, the rope was not tight around Susuruka’s wrist and there was no lasting damage. 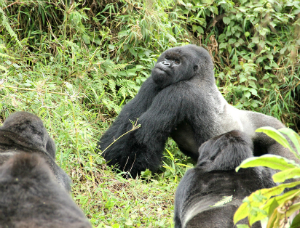 Gushimira’s group is a new group monitored by the Karisoke Research Center. It formed in February 2013, when lone silverback Gushimira succeeded in taking females from Ugenda’s group. Gushimira eventually lost one of his females, Inziza, who returned to Ugenda’s group, and recently lost female Kurudi to Titus’ group. However, during an interaction on Aug. 26, Gushimira gained two new family members.

“It was a great surprise when we saw Gushimira’s group after many days!” Vecellio said. The group’s team of trackers had lost the gorillas’ trail on Aug. 5. The team is dedicated to tracking this particular group of gorillas each day to be sure that all of the gorillas are safe from any signs of illegal activities, and that they are all present and healthy in the group. But sometimes the gorillas’ tracks get lost in the dense forest vegetation. Despite special efforts made to locate Gushimira’s group again, they were not found again until several weeks later.

At first field staff thought they were witnessing an interaction between Ntambara’s group and a lone silverback. Upon further observation, they realized the gorilla they had identified as a lone silverback was in fact Gushimira. Although Gushimira was the target of many displays and aggressions from the silverbacks in Ntambara’s group, at the end of the interaction, he dragged female Pasika away to join his group with her infant Turate.

Transfers like this one, involving an infant, can be dangerous, as the strange silverback may try to injure or kill the infant. However, at the age of 3, Turate is almost a juvenile and has already been weaned, which gives Gushimira less reason to be aggressive toward him. (Because nursing females cannot become pregnant, infanticide is thought to be one strategy for males to reproduce more quickly with newly acquired females, who will become receptive again only after weaning their infants.) Vecellio reported: “Turate charged Gushimira once when Gushimira was posturing in front of Pasika, but Gushimira seemed to ignore him.” Two weeks after the transfer, we were very relieved to see that Turate seems to be integrated into the group and out of danger.

When Karisoke trackers observe a female transfer, they follow the female closely for the next month and take particularly detailed data on her behavior and interactions with other members of her new group. This case is no exception. Gushimira’s team is happy to have found their group again and interested to see how the new female and her young son integrate into the group. 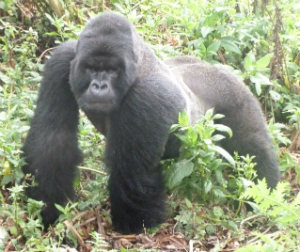 Bwenge was observed interacting with a lone silverback. At first it seemed likely that the silverback was Giraneza, since female Taraja (Giraneza’s last remaining female after an interaction in June) was observed transferring into Bwenge’s group during the interaction. However, the silverback turned out to be Mafunzo, who left Pablo’s group in May 2012 to strike out on his own. Field staff were excited to see Mafunzo, as he had not been seen since his departure in May.

Female Taraja entered Bwenge’s group early in the interaction. Bwenge seemed uninterested in her, but female Maggie, from Bwenge’s group, charged Taraja a couple of times. Vecellio remarks that Bwenge may have been ignoring Taraja to avoid a worse conflict with Mafunzo but believes a familiarity between the two gorillas might also have affected his behavior. “Bwenge and Taraja were both born and grew up in Beetsme's group, which may be the reason for the apparent impassivity of Bwenge to the new female.”

Mysteriously, the next day, Bwenge’s team did not find Taraja in the group, and by counting the night nests, they could see that Taraja did not spend the night in the group. Trackers could not find any trace of her, Mafunzo, or Giraneza. Thus far, we have not been able to find her again, but field staff are confident they will see Mafunzo or Giraneza again soon, and perhaps be able to solve the mystery of which silverback Taraja ultimately joined.