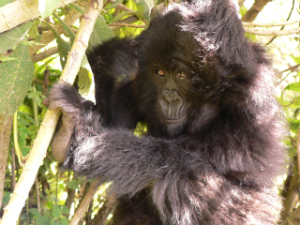 Some of you may wonder how a gorilla you adopted years ago is doing now. As the coordinator of Karisoke's gorilla research program I am pleased to get to know each of the more than 120 mountain gorillas we monitor daily, each one with an individual personality and life story. For my first blog I'll tell about one of the gorillas whom many of you first came to know when she was an infant.

Kubana, a young female who was 3 years old when she was in our Adopt program in 2006, will have her eighth birthday on Aug. 28. She lives in Ugenda's group, which was formed when Shinda's group split following the dominant silverback's death in November 2008. Kubana is already able to have offspring, and the young silverback Wageni, the second-ranking silverback in the group, has taken an interest in her. They were seen together a couple of times this year. 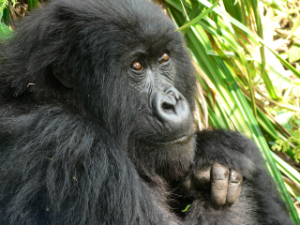 However, Kubana is still very young to give up playing. She likes to spend time with Ubufatanye, a female of the same age, and also with the infants of the group. Her mother, Kubyina, is one of the oldest gorillas in the Karisoke groups and definitely the dominant female in Ugenda's group. Kubyina is estimated to be 29 years old, and is currently taking care of her 2 -1/2 -year-old infant. Kubana likes to help her mother take care of the infant, and she and her young brother are often together during resting time.