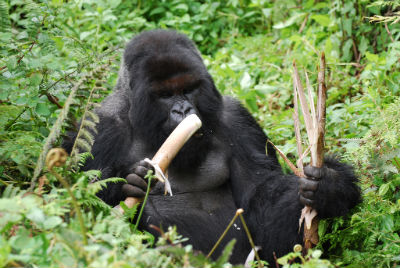 Each year, the second half of October brings the beginning of the bamboo growing season in Rwanda’s Volcanoes park, home to the mountain gorilla groups we monitor from the Karisoke™ Research Center. A preferred delicacy of the mountain gorillas, the new shoots of bamboo beckon the gorillas to travel to the bamboo vegetation zone, which is at the lowest altitude of the mountains in a short belt along the park border.

This time, all of the groups we monitor moved downhill in order to share this savory food resource. The food consumption did not come without competition, and several inter-group interactions occurred in the dense bamboo vegetation, leaving the strongest group leaders with the power to select their preferred area.

Because of the limited region where the bamboo vegetation is available, some groups are forced to range at an unusually small distance from each other. For several consecutive days, Bwenge’s, Urugamba’s and Ugenda’s groups all ranged in the bamboo near Susa River, moving as close as 50 meters from one another, but ignoring each other. 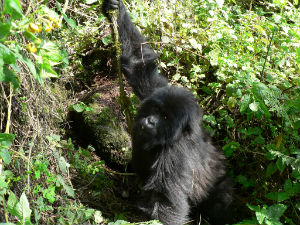 Urugamba’s and Ugenda’s groups continued moving in the same area, with only 200-300 meters of distance between them, for two weeks. Because these two groups formed from a split just 10 months ago, the members apparently don’t feel threatened by sharing the same area. Juvenile male Inkumbuza moved between Urugamba and Ugenda’s group four times in the two weeks, enjoying the peaceful company of mother Pasika in the first group and friendly play with other juveniles in the second.

A serious consequence of the bamboo season is that gorillas sometimes take advantage of the short distance from the bamboo zone to the park’s edge, and cross the stone wall that marks the border between forest and cultivated fields. 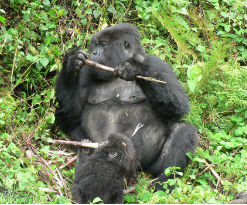 During the last 10 days of October, each of the gorilla groups we monitor moved out of the park at some point, and every day at least one group spent from 30 minutes to two hours not far from houses and domestic animals. Gorillas greedily eat eucalyptus tree trunks, which are abundantly cultivated near the park for construction timber. Our field staff is closely monitoring the gorillas when they move out of the park, trying to make sure a safe distance is maintained between human activities and the gorillas.