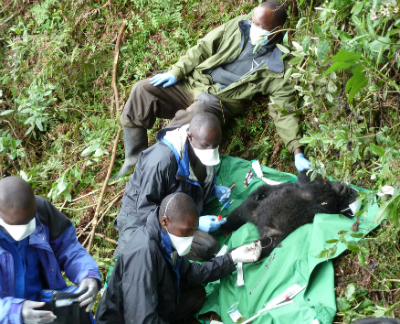 Here are some more details about our difficult but finally successful attempt on Sunday May 29 to free infant Imfura from a snare rope that had been attached to his right leg since the previous Tuesday. After the second unsuccessful attempt (see previous blogs), we had decided to rest for a day before hiking to Pablo's group for another attempt.

The dedicated team that tracks Pablo's group reached them very early in the morning and found Imfura and Ishema feeding at the periphery of the group, probably to avoid aggressions. Later, when the intervention team reached the group, it was decided that both mother and infant should be anesthetised.

Pablo's group is the largest gorilla group, so we were a big team as well: 19 people (10 from Karisoke, six from the Rwandan park authority, and four from the Mountain Gorilla Veterinary Project).

After preparing the darts for sedation, the three veterinarians followed the head tracker, Francois Xavier Ndungutse, to where Imfura and Ishema were feeding. Silverback Gicurasi was also nearby, but he seemed to have calmed down after the aggression on tracker Jean Bosco Ntiragenya during the first intervention attempt.

The vets darted Imfura and his mother Ishema. Both gorillas screamed, followed by a loud scream from Gicurasi. However, they did not attack the vets or trackers. Very few other gorillas noticed this and only briefly stopped feeding.

A few minutes later, as the anaesthetic was taking effect, the first team moved in and formed a protective belt around the two gorillas and the vets. Finally, the rope was removed from Imfura's thigh and everybody let out a sigh of relief. The rope did not seem to have caused any major problems to the leg. The vet took various samples for later analysis to check the health status of the two gorillas. Ishema's ear was bleeding from a fresh wound, which she appeared to have sustained in the morning protecting her infant.

Once both gorillas were awake and Ishema was able to move, with Imfura close to her, we decided to leave and allow the trackers to continue monitoring them. The trackers later reported that Ishema and Imfura were rejoined by some individuals from the group and that they were seen feeding but showed some signs of weakness

As we walked back, everybody was tired but satisfied with the great job they had accomplished. See our News page for more photos and full story, coming soon.