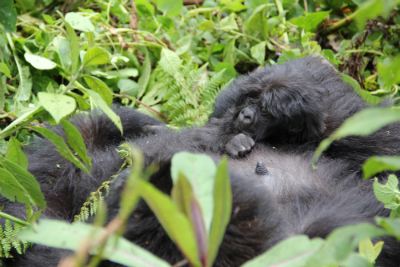 When mountain gorilla female Imvune, a member of the Titus group now led by Rano, gave birth in March it was special because the Karisoke trackers were in the group when it happened. Usually they don’t observe births first-hand and only find newborns with the mother in the morning when they arrive to observe the group.

The trackers saw Imvune moving around uncomfortably, followed by the other gorillas. When all the gorillas moved away a bit from the site, the trackers could see traces of blood where she had been and were concerned about a possible illness, but soon saw that she was holding an infant! All the gorillas were very interested in the new arrival and watched Imvune cleaning and grooming her infant. Rano remained next to her and displayed to the other adult males, trying in vain to chase them away. The trackers were also interested in seeing the new infant, after a long time without a birth in that group. In fact, Imvune’s infant is the first and only offspring of dominant silverback Rano.

Today, one month later, Imvune’s infant is growing well. Mother Imvune is extremely protective. After a first week during which she never lost proximity to silverback Rano, she is now much more independent. She spends most of her time feeding alone, far from other group members. When she is tired she joins Rano, and they rest together in the company of silverback Pato. 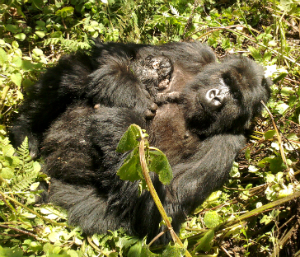 This behavior makes sense, considering that she needs extra nutrition for lactation. Feeding alone can be a strategy to ensure a wide selection of food and avoid any sort of limitation due to competition for food from the other gorillas.

Yesterday Rano made several hooting vocalizations (“hoo hoo hoo”), calling Imvune, who was going too far away. She responded immediately, joining him for a short resting time before starting to eat again.

The baby is transported ventrally (clinging to her stomach) and firmly holds onto the mother as she moves looking for food, even while she climbs trees looking for the favorite Gallium vine. The youngster is alert and curious.

It was not possible at this stage to detect the sex of the baby.

From reports by Jean Paul Hirwa and Veronica Vecellio