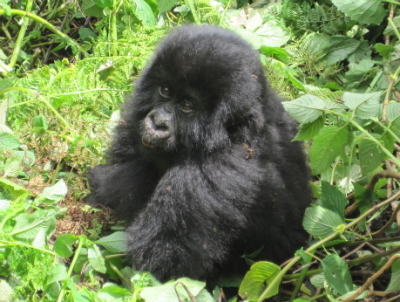 On Tuesday, one-and-a-half-year-old infant Urahirwa from Ntambara' s group was found to be lethargic, not moving much and, worst of all, not suckling. Mother Kubaka was carrying the infant on her back. Urahirwa had a severe skin lesion around her nose and mouth. She had been fine on Sunday, and on Monday the group was not monitored because the gorillas were in a deep ravine on the slope of Mt. Visoke.

On Wednesday three veterinarians from the Mountain Gorilla Veterinary Project and the Rwandan Development Board visited the group to assess the infant’s health, carrying an intervention kit just in case. Our Karisoke trackers were also there to support the vets in case of an intervention, which wouldn’t have been easy because the group has three silverbacks.

Fortunately, Urahirwa was fine. She was perfectly normal apart from the skin lesion. She was eating, climbing a tree and playing with another infant and her brother Kwiyongera. So there wasn’t any need of an intervention.