During 2007 the three large multi-male groups we had studied at Karisoke for the past several years broke up to form smaller groups, each with fewer males, and many females transferred among groups. Some silverbacks began to roam on their own. This was the most dramatic period of change in the Karisoke gorillas’ social organization since our long-term studies began decades ago! 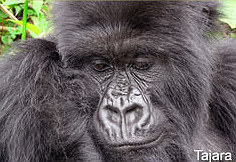 Beginning in March 2007, the groups we had studied for so long began to split up and reorganize. This opened up many new opportunities for our research staff to observe behavior such as multiple female transfers; male dispersal, including some silverbacks striking out on their own; and dominance changes. It also presented an unusual opportunity to observe changes in social dynamics as group sizes changed, and to compare small with large groups and multi-male with single male groups. In fact, so much was going on that quite a few new field researchers and trackers were hired to help keep track of all the different groups.

By the end of 2007, Karisoke staff were now monitoring eight groups! Here’s what happened toward the end of the year:

In September, 8-year-old female Taraja left Titus’ group (a new group formed from the split of Beetsme’s group). She was finally found with the lone silverback Inshuti, 10 days after her disappearance. Inshuti had tried hard for the whole year to gain females from different groups but he couldn’t seem to succeed, except for the temporary stay of a female now and then, who always left him after a few days.

In September, however, Taraja accepted him as partner and the two gorillas formed their own little group. But Inshuti was not completely satisfied and he kept interacting with other groups, hoping to gain some more females. In October he succeeded again when, after an interaction with Bwenge’s group (also a newly formed group), Ruhuka, an 8-year-old female, joined him. The new little group has been regularly monitored and from behavioral observations it appeared clear that the preference of Inshuti was now for Ruhuka rather than Taraja (based on the amount of time he spent with Ruhuka). Taraja became more peripheral and the other two were often in physical contact and very close during all routine life activities.

Inshuti is a very tough silverback and he is very persistent in his objective to create his own group. Even with the two females he gained, he continued to interact with the other groups. His perseverance was punished during an interaction with Pablo’s group, the biggest group we monitor. In this interaction, he lost Taraja, who took the opportunity to move into the other group. But Inshuti remained with Ruhuka and we are sure he will try again to add more females to his own group. 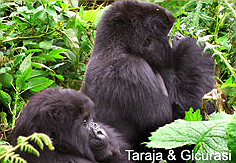 Taraja in the meantime has been the target of the young silverbacks of Pablo’s group. During the first two weeks of her stay in Pablo’s group, she was with Gicurasi, a 12-year-old silverback. She seemed to enjoy his company and she followed him all the time. After some days, Giraneza, who is just one year older than Gicurasi, approached the couple and challenged the young rival for the new female. Taraja accepted the change of partner and she started moving with Giraneza.

Giraneza, happy with the new conquest, now took the occasion to form his group as well. The two gorillas left Pablo’s group on Dec. 27 and have been traveling independently since then. Giraneza is especially young to lead a group, but the gorillas continue to surprise us and it is not unlikely that he will succeed and carry on his group.