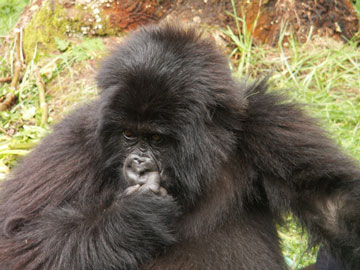 DFGFI's Karisoke Research Center is currently taking an active role in the care and rehabilitation of seven confiscated young gorillas.
These gorillas are the result of illegal incidents in several areas and were confiscated from poachers by local authorities.
Since they are too young to survive on their own, the Fossey Fund, along with several other groups (the Mountain Gorilla Veterinary Project, the Rwandan office of tourism and national parks – ORTPN and the park service in the Democratic Republic of Congo – ICCN) is providing care for them.
With the gorillas ranging in age between 5 months and 5 years, they are much too young to be reintroduced into the wild. Although it is not ideal, as a temporary measure their human caregivers provide them with the physical contact, affection and play necessary for their healthy development.
One of the main roles of Karisoke staff involves behavior evaluations of all the confiscated gorillas on a regular basis. This is necessary due to the traumatic events they have undergone and because they are now without their normal social situations.
Among the gorillas is Maisha, a female mountain gorilla of around 5 years old who was confiscated in December 2004. When she was first confiscated, Maisha was in terrible condition both physically and mentally, as she had been kept in a sack for two weeks, only being let out once a day for some bananas.
Now, nearly two years later, we are pleased to report that she is doing well and has become an active, playful young gorilla.

Maisha has been looked after by a team of caregivers made up of Karisoke, ORTPN and MGVP staff in Kinigi, close to the edge of the Virungas park. This facility has now been converted into a spacious gorilla enclosure big enough for all our current charges.

We are pleased to announce that Maisha has now been joined by two of the other confiscated gorillas, Ntabwoba, a male Grauer's (eastern lowland) gorilla, also around 5 years old, and Dunia, a female Grauer's gorilla who was confiscated from poachers in March of this year and is believed to be around 1-1/2 years old.