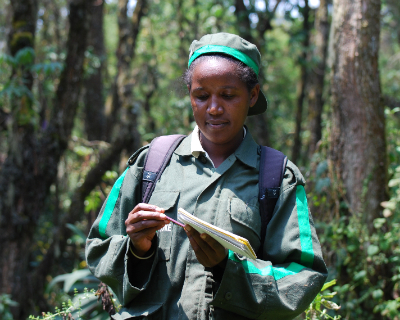 In July, the Karisoke Research Center sent Research Assistants Theodette Gatesire and Jean Paul Hirwa to a workshop in Bwindi, Uganda with the theme “Gorillas across Africa.” Hosted by the Institute of Tropical Forest Conservation (ITFC) and led by the Max Planck Institute and the North Carolina Zoo, it included representatives from the majority of countries with gorilla habitat. Participants came from Uganda, Rwanda, Democratic Republic of Congo (DRC), Republic of the Congo, Gabon, Cameroon and Nigeria. The workshop allowed them to share their knowledge and experience and broaden their understanding of the many issues affecting gorilla conservation.

“We believe this was the first time that such a broad gathering has been convened,” said two ITFC staffers on their blog. They also noted the differences in each country’s experience in gorilla study and conservation, ranging from the long-term study of mountain gorillas in the Virungas to the difficulty of even making an estimate of the population of lowland gorillas in the DRC.

Each country’s representative gave updates on the status of gorillas in their country and shared information on gorilla research history, ongoing research projects and findings in different countries. The Mountain Gorilla Veterinary Project reported on mountain gorilla health care, cases of gorilla illnesses, and recent veterinary interventions. Conservation Through Public Health described its work in communities around the Ugandan protected areas. A Conservation and Communities session focused on different approaches to gorilla conservation and how community-based conservation is effective in different countries. Some presentations also covered conservation education. 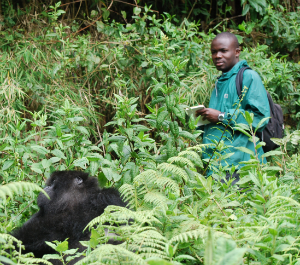 Gatesire described lively interchanges among the participants, eager to learn from their counterparts. “We even took advantage of the breaks to understand more about what is happening elsewhere, so we could share the experience of our colleagues from the DRC who are struggling to protect gorillas in spite of the total insecurity in their country,” she says. “We also learned that in West Africa, poachers are still killing gorillas as bush meat and it requires much effort to educate those people.”

She learned that all gorilla populations are facing almost the same threats but countries have different policies and different degrees of interest in their protection. “Some countries like Rwanda and Uganda put much effort into gorilla conservation and tourism while others like Gabon are interested in logging and oil extraction,” Gatesire found.

The workshop allowed the participants to learn about types of gorillas found in other countries, and new research techniques. They hope funding can be found so the workshop can be offered every year.

The workshop related directly to Gatesire’s and Hirwa’s work at Karisoke, where they study gorilla behavior. “At the Dian Fossey Gorilla Fund International we believe strongly in capacity building for our African staff, so that they can take the lead in conserving their rich natural heritage,” says Karisoke Director Katie Fawcett, Ph.D. “Theodette Gatesire and Jean Paul Hirwa are talented field researchers. I’m very pleased that they could take advantage of this opportunity to broaden their knowledge of gorilla conservation and share their experience at Karisoke with others.” ﻿