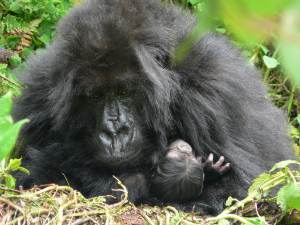 When 33-year-old Kwiruka gave birth mid-July, surprise was complete for Karisoke™ Research Center staff. Considering that the average lifespan for a female gorilla is 38-40 years old, and that only three other females Karisoke has monitored have given birth at the late age of 33 and above, Kwiruka’s story was certainly one to make headlines.

The joy would, however, last only 12 days. In a fateful turn of events, Kwiruka and her infant suddenly disappeared from Bwenge’s group.

For days, several tracker teams looked for their traces, suspecting the worst — but at the same time most probable — scenario: that the infant was dead, and that the aging mother had decided to move away from the group, likely dissatisfied with silverback Bwenge. Since joining this group in January 2008, she had already lost another infant, due to unknown causes. In mountain gorillas, infant loss is one of the main reasons why females transfer to other groups.

Bwenge himself was on the lookout, displaying several times and even moving away one night when his nest was not found together with the rest. He eventually returned and led his group quite far away, which further complicated the situation, in case the lone, vulnerable female had wanted to go back.

But Kwiruka kept staying away. Her usually reserved nature made it all the more difficult for trackers to locate her. Finally, four days later, they caught sight of what they had feared and by now almost expected: the mother was carrying her dead infant. Before running away from the trackers, she did drop the small body to the ground. The advanced state of decay prevented a conclusive necropsy result, which could only establish that the infant had already been dead for five days. According to Veronica Vecellio, Karisoke’s Gorilla Program coordinator, we can only speculate that Kwiruka’s old age might have caused her milk supply to be insufficient. 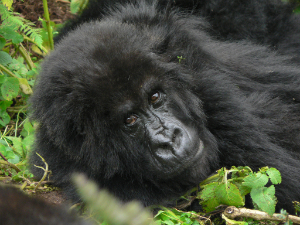 After parting with her dead infant, Kwiruka made herself scarce for an additional two days. Contrary to all expectations, she then rejoined Bwenge’s group, which meanwhile had returned to their usual area. She was welcomed back without any problems. Bwenge displayed at her a few times and once also hit her, just to show her his disappointment. Females approached her curiously, but not aggressively. But Kwiruka had one more surprise in store, as she disappeared from the group once more on August 13 and has not been located as of this writing. Her situation remains subject to change.

Kwiruka was the oldest member of Bwenge’s 11-gorilla group. She was born in Group 6, which was not a very well-habituated group, and then transferred successively to Group 5 and to Shinda’s group, where she soon gained the top rank among the females. Before joining Bwenge, she had six other offspring, five of whom are still alive. Among them, silverback Ntambara is most prominent, having formed his own group in 2008.