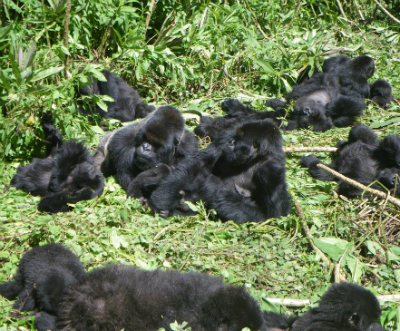 The largest group of mountain gorillas, named after Pablo, a historic silverback, recently reached a membership of 48 individuals when a new birth occurred May 12.This large number of gorillas in one group is particularly unusual because of the coexistence of 13 adult males (more than 8 years old), of which six have already reached the silverback stage (more than 12 years old).

Males in mountain gorilla society live together under a strict hierarchical order, which is evident in Pablo’s group. Considering the number of sexually mature males, one could expect a high level of competition for females, but this is not the case in Pablo’s group, where all males seem to respect each other’s roles. Most of them stay on the periphery of the group, to protect it against intruders. The presence of 13 mature females makes the group very attractive for other groups or solitary males aiming to increase their group’s size or to create their own group.

In order to avoid any loss of females, Pablo’s group gradually shifted its home range to the alpine zone in the highland called Kimbagira, on the Karisimbi volcano. Gradually in the past three years, this zone became the core area of the group’s habitat and is frequented by the group for most of the year. 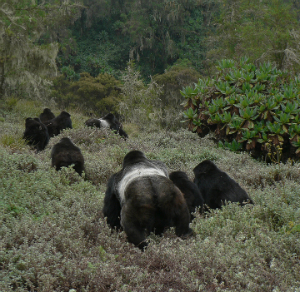 Reaching Kimbagira requires a four-to-five-hour hike up the steep and slippery slope of Mount Karisimbi. Numerous high-sided ravines up to 30 meters deep make the area even less accessible. Gorillas barely succeed in crossing such valleys, which form a natural barrier impossible for any human to cross. For that reason, monitoring the group is becoming harder and harder, and with increasing frequency the field staff is missing the daily control, losing the group for several days.

On one of these occasions, in the second week of May, the group was not located for four consecutive days, raising the concern of all the Karisoke staff. The group has finally been found after long days of searching, thanks to support from the Rwandan Development Board staff and the most experienced Karisoke trackers. This is the second time in 2011 that the group has been missed for many days; the first time happened in February, when the search lasted five days. The Karisoke staff makes a great effort to minimize the difficulty of the daily monitoring and data collection, now that the group has moved so far away.

Despite the difficulties in tracking Pablo, we feel that being with this group is a blessed experience. The large number of gorillas offers an exhaustive array of gorilla behavior and ecology in just a few hours of observation. All kinds of gorilla sounds are frequently heard, including agonistic (conflict) vocalizations such as pig grunts for food access, screaming during aggressions or the chest-beats of a silverback displaying. With the same regularity you can hear gorillas laughing during play or the well-known “belch vocalization” expressing well-being, which typically is followed by a sequence of the same vocalizations by many other group members.

It is especially pleasant to observe so many gorillas on the soft surface of the alpine meadows surrounded by the beautiful Dendrosenecio, a small tree appreciated by the gorillas as food. 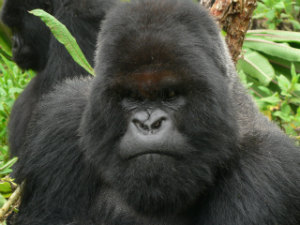 Particularly interesting are the social dynamics around the adult males, as the group is facing a delicate phase. The dominant silverback Cantsbee is too old to ensure the group’s leadership over the long term. Cantsbee is, indeed, the only gorilla born in the 70’s that is still alive. Even if he keeps the role of group leader he is clearly sharing responsibilities with the beta male Gicurasi. The two silverbacks are often close to each other, surrounded by all the females and immature gorillas. Gicurasi has complete freedom of access to the females and he is the main actor of all copulations observed. On the other hand, Cantsbee still keeps the front position during group travelling, followed by all group members. On a daily basis we observe Gicurasi attempting to pass by Cantsbee, but he is rarely successful.

Different scenarios may be predicted for the near future of this historic group that has been monitored since its formation in May 1993, exactly 18 years ago. What is sure is that a change will happen soon, adding essential information to scientists’ knowledge of this species.