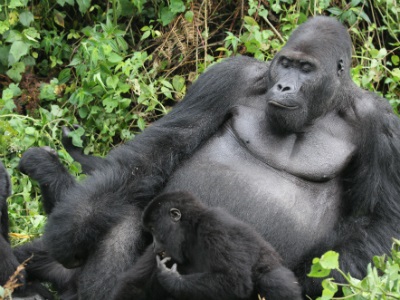 In the Democratic Republic of Congo, the Dian Fossey Gorilla Fund has been working with staff of Kahuzi-Biega National Park to study the only habituated group of Grauer’s gorillas, whose population in general has been facing severe decline. This group is led by a silverback named “Chimanuka,” who is quite an interesting leader!

At an estimated 30 years old, Chimanuka has a special history. Half of the gorillas in the area where Chimanuka lives were killed during the most violent part of the conflict in eastern Congo (1996-2003). Chimanuka is one of the few silverbacks who survived. He was then a solitary male but formed his own group in 2002 and rapidly acquired adult females from a neighboring group, where the silverback was not as strong.

Chimanuka has since had a number of offspring, and he now leads a group of 23 individuals, with four adult females and 18 younger members. It is very unusual that he has twice sired a set of twins, and two of the twins are currently being monitored and doing well. He also has a special personality.

“Chimanuka is the most peaceful gorilla I’ve ever worked with,” says Dr. Damien Caillaud, the Fossey Fund’s research director in Congo. “He is extremely tolerant toward humans.”

He’s also known for his immense size, which was actually measured this year (using measurements based on photographs) and compares in size to mountain gorilla silverbacks Isabukuru and Musilikale, the largest silverbacks we monitor in Rwanda. Yet, like Isabukuru, he also exhibits great patience with the younger gorillas in his group.

Although they are closely-related, Grauer’s gorillas are quite distinct from mountain gorillas. They tend to live in slightly larger groups and typically have only one silverback male, whereas mountain gorilla groups often have more than one. Their diets are also more diverse and vary by season. However, due to the decades-long civil unrest in Congo, much less is known about them than about the mountain gorillas. Thus there is need for intense study of their habitat requirements and social and demographical characteristics now, so that the best methods for their conservation can be established. 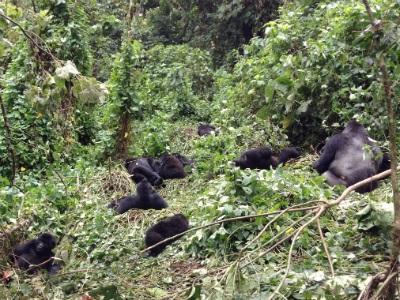 To study Chimanuka’s group, we have research assistant Neetha Iyer and Kahuzi-Biega staff Teddy Nishuli using an electronic tablet and custom software designed by Dr. Caillaud to collect detailed social behavioral data. This information will help us understand how this gorilla society has evolved in response to characteristics of the forest and will provide insight into the uniqueness of Grauer’s gorillas’ social behavior.

The Fossey Fund is also studying non-habituated Grauer’s gorillas from our Nkuba-Biruwe research site in Congo, where we collect information by staying one-day’s distance from the groups we have identified. In this lower-altitude area, we collect data using nest sites, food remains, vegetation disturbance, fecal samples for DNA testing, and other signs.