Naming infant mountain gorillas has become an important annual nationwide tradition in Rwanda during the past 12 years. The naming ceremony, called Kwita Izina, is based on a historic Rwandan cultural practice for naming newborns, and has been adapted and enhanced to celebrate successful gorilla protection and conservation. The weeklong event in Rwanda now includes a variety of conservation-awareness activities, with government leaders, park staff, local groups, students, celebrities and communities all joining in to help choose names for the gorillas born in the past year. 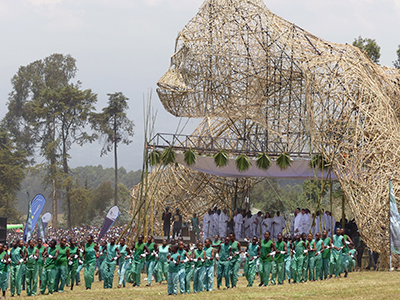 The integrated approached to conservation in Rwanda, through tourism, government commitment, research, protection and community initiatives has seen important successes, and Kwita Izina is now an important national celebration.

The naming of mountain gorillas actually goes back to the days when Dian Fossey worked in Rwanda, as she began “habituating” them to the presence of human observers so that she and other scientists could observe and study them closely. After her death, park staff, Fossey Fund staff and scientists continued the tradition of naming them, and in 2005, Rwanda decided to formalize it into a national annual celebration, now called “Kwita Izina.”

This year, the Kwita Izina included a series of activities aimed at increasing awareness for conservation, including:

• A gala at the new convention center in Kigali, to help raise funds for several conservation projects
• A conservation and tourism exhibition at the Kigali Conference and Exhibition Village, in which staff from the three main national parks in Rwanda presented their activities, along with posters and other information presented by students and researchers
• The second edition of the “Conversation on Conservation,” a two-day conference focused on sustainable development and the prevention of illegal wildlife trafficking.
• The 12th Kwita Izina naming ceremony, held in Kinigi, featuring a speech by Rwandan President Paul Kagame. A unique gorilla-shaped stage made out of bamboo and wood created the backdrop for this event, along with dancing and other entertainment.

And now, the names…

Among the 22 gorilla infants receiving names this year was the surviving Isaro twin and eight others from groups monitored by Karisoke. Isaro’s infant received the name “Kura,” which means grow and was intended as a wish that this infant will grow strong, along with his group. Kura was born on Jan. 18 of this year as a twin, in Isabukuru’s group, but the other twin died in August, resulting from an interaction with another group. Isabukuru’s group was formed in 2007 and grew rapidly to 20 members. It has two silverbacks, though Isabukuru is well established as the dominant male. 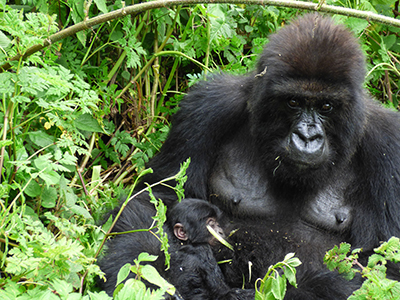 Isaro is taking great care of the remaining twin. Having only one infant to carry now makes it easier for her to move and find adequate food. Kura is now growing at a faster rate since the death of the brother, so may have better survival odds.

Other infants in Karisoke groups receiving names this year are: