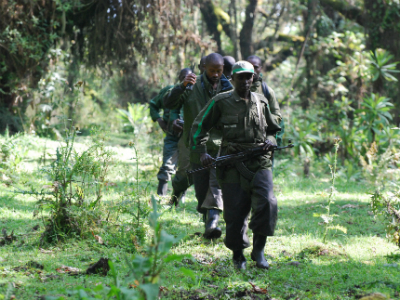 Dian Fossey was the first person to promote active protection against poachers in Volcanoes National Park, which is the Rwandan side of the Virunga protected area. She initiated anti-poaching patrols aimed at dismantling the hundreds of snares found in the forest, work that the Dian Fossey Gorilla Fund continues today. While these snares are generally intended for game animals, such as antelope or buffalo, the gorillas can and do become caught in them as well.

Now, nearly 50 years after Fossey founded the Karisoke Research Center, anti-poaching activities are a fundamental part of park management. Every day, park authorities and the Fossey Fund collaborate to locate and dismantle snares in Volcanoes National Park. In addition, trans-boundary patrols among the park services of the three countries that share the Virungas—the Democratic Republic of Congo, Rwanda and Uganda—are also done.

Despite the daily efforts of anti-poaching rangers, the number of snares set in the park has remained very high, reaching about 1,000 every year in Rwanda alone. This averages to one snare per patrol. For almost a decade, this number had not decreased, making snares one of the main threats for the mountain gorilla population. During this time, 24 gorillas were trapped by snares, with 14 instances that required veterinary interventions and two gorillas that died as a result.

In recent years, Rwanda’s park authorities have undertaken additional actions to strengthen anti-poaching efforts. The main approach has been to engage local community members to become anti-poaching patrol members and participate in planning anti-poaching patrols. This approach also includes working with community associations at the village level to promote anti-poaching and support of law enforcement, recognizing that protecting the park has benefits, including improved livelihoods.

These actions resulted in large improvements in snare detection, due to the increased number of community members involved in patrols. Despite these improvements, however, the number of new snares still remained high, suggesting a need for additional strategies.

A campaign of reform and sensitization

In 2014, Prosper Uwingeli, Chief Park Warden, Volcanoes National Park, Rwandan Development Board, developed an idea for a campaign to educate suspected poachers. “The community partnership program at the Volcanoes National Park had produced some outstanding results, highlighted by the improvement of attitudes towards the park,” says Uwingeli. 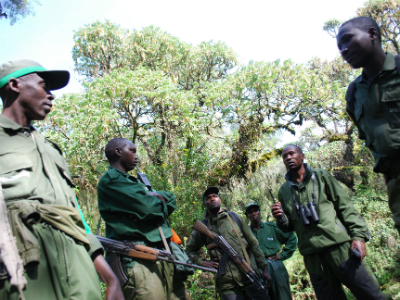 But after participating in an anti-poaching patrol and seeing the large distribution of snares in one relatively small area of the park, Uwingeli felt that most snares might be set by a small number of people, who had resisted other attempts to stop them. “That justified the need for a special approach, built on the successful outreach of the park programs,” says Uwingeli.

In 2014, the park authority and the Musanze District developed a major sensitization campaign, targeting suspected poachers living in the communities surrounding Volcanoes National Park in four critical poaching sectors. The Fossey Fund recognized the relevance of the initiative and helped fund it, and results were seen immediately.

Following various local meetings, approximately 120 individuals suspected by neighbors to be involved in illegal poaching activities around the park participated in a suspected poacher transformation campaign, which began in June 2014 and lasted for two months. During the campaign, the individuals learned about various subjects, including the importance of environmental protection, tourism benefits, human rights, community conservation initiatives, and how to develop cooperative and income-generating activities.

During the training, many suspected poachers confessed to setting snares in the park and offered to show authorities where the snares were located and participate in the removal. More than 100 snares were consequently detected.

As a result of the campaign, the first significant decrease of snares in the park was observed: 40 percent fewer snares were found in the second half of 2014 as compared to the first half of the year. Even more impressive was that from August to December 2014, no fresh snares were found, only ones set prior to the campaign were located. This suggests that the majority of poachers participated in the training and did not set any new snares during the following months.

“For the first time in history, the park authority has worked with communities to seek out those who are not only destroying the park but are also damaging this source of benefits. The challenge is to have all communities on the right side, working together to protect the park and their rich heritage,” says Uwingeli.

The biggest achievement of this campaign is not just the reduction in numbers of snares, which was observed after the campaign, but the identification of the poachers and the involvement of local government authorities to fight against poaching. Another significant achievement is the collaboration between local authorities and park management toward collecting information about poaching incidents. The collaboration has resulted in a revival of a network of informers throughout communities near the park.

While there is no way to completely prevent continued poaching, reports from the field continue to show a decrease in snares. Authorities and stakeholders are now planning to move on to a next phase of this approach, one that would develop a greater understanding about the livelihoods of poachers and that would design interventions to address those issues. One such challenge that lies ahead is identifying a reliable alternative source of subsistence for people who have primarily relied on poaching as a source of protein.

Some of the ideas for moving forward with this anti-poaching approach include:

•Organizing a workshop to share results of the joint campaign and formulate the lessons learned.

•Reviewing the proposed communication channels and incentive system for informants.

•Organizing a second campaign at the beginning of the dry season, which historically correlates with an increase of illegal activities in the park.

“We are very excited to see the impact of the poacher training activity, which the Fossey Fund joined in collaboration with the national park authority in Rwanda,” says Felix Ndagijimana, the Fossey Fund’s director of Rwanda programs and the Karisoke Research Center.

“This activity highlights the importance of involving different stakeholders, such as local leaders, in addressing poaching,” he says. “The effectiveness of this activity is proven and the Fossey Fund will be part of future efforts to ensure the sustainability of these positive outcomes and continued collaboration with our partner ─ the national park authorities ─ and other stakeholders.”