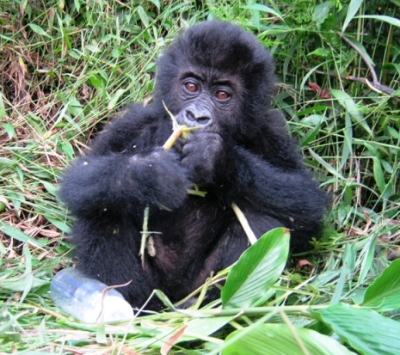 A new gorilla infant rescued from poachers arrived this week at the Gorilla Rehabilitation and Conservation Education (GRACE) center in the eastern Democratic Republic of Congo, following a difficult overland journey. Now named Ihomé after a prominent landowner who had donated the site for GRACE, the infant is a male Grauer’s gorilla, about one year old.

On June 1 word came to the GRACE staff from local people that a gorilla orphan was in the hands of the Buniatenge community, about 200 km away. Congolese veterinarian Jackson Mbeke and gorilla caregiver Kambale Muviri packed up a medical emergency kit, milk, bottles, food and blankets and drove to the town of Lubero. The next morning Mbeke and Muviri set off for the village. On arrival in Buniatenge they met with the community, who handed over the infant gorilla to the GRACE team.

Mbeke and Muviri gave Ihomé a preliminary physical exam and started to feed him rehydration fluids followed by food and milk, which the gorilla immediately accepted. Ihomé was in good physical condition, with minor injuries on his waist. 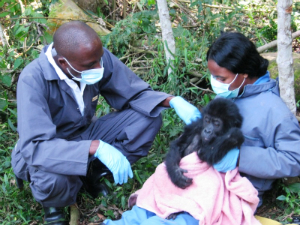 The GRACE team left in the car that evening with Ihomé to begin the drive to GRACE. They hoped to arrive before midnight, but unfortunately they had to fix a tire in Lubero and then the tire gave way again on the road from Lubero to Kasugho (where GRACE is located). There was no way to fix it this time, so Mbeke and Muviri decided to leave the car on the road and walk the remaining five km. They arrived at GRACE at four in the morning on June 3. Muviri spent the following hours sleeping with Ihomé in the quarantine room.

Since we received the news about the new infant gorilla, veterinarian Mike Cranfield of the Mountain Gorilla Veterinary Project has been on standby to go to Kasugho to give medical support. We are working with Cranfield to organize Ihomé’s medical exams. We are grateful to all the members of the GRACE team and all our partners for their support for this quick and successful response.

Ihomé is an energetic little guy who likes to play. After his quarantine period he will join six other young gorillas already in residence at GRACE, and begin the process of learning the social and survival skills necessary to prepare him for eventual release to the neighboring forest.