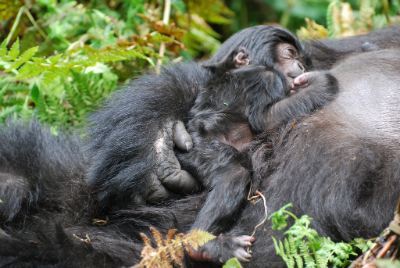 Such a good start of the New Year for Inshuti’s group! First the group gained a new female in January, then a new infant was born on February 22. This is the first offspring for the young female Tayna, who just turned 8 at the end of 2010.

Tayna has been together with Inshuti since January 2009, when she left Titus’ group during an interaction between the two groups. At that time she was a young subadult female. The females in the group welcomed her from the very beginning, as did Inshuti himself. This was made easier because the two females in the group at the time of her transfer – Taraja and Shangaza – had both come from Titus’ group and were therefore already familiar with Tayna. The three females soon formed a solid alliance, spending their time together as a family. 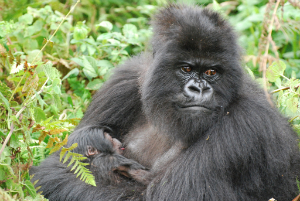 Tayna has a unique facial appearance, with an asymmetric flattened nose, which gives her a sweet and funny expression and a distinct loud snoring sound, making it very easy to locate her when the group is resting. In addition, she has a very gentle personality, which soon won her affection from all Karisoke field staff.

It was therefore with special joy that we discovered her one morning with the tiny newborn. The young Karisoke mascot had become a mother and a good one too: she is demonstrating a natural talent for taking care of the infant, with affection and great confidence. 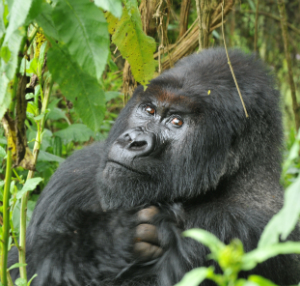 Silverback Inshuti, undoubtedly the infant’s father as he is the only male in the group, is visibly proud of his third offspring. He spent the first days after the birth close to Tayna, which made it very difficult for the field staff to have a proper look at the newborn and to see if it is male or female. Inshuti has achieved unusual success since late 2007 when he became the only former “lone silverback” observed by Karisoke in recent years that has managed to attract females and establish a stable group of his own. He now leads four females, two with offspring.

Tayna and Inshuti have opposite physical features, as Tayna is a small and distinctive-looking female while Inshuti is one of the largest silverbacks living in the Virunga volcanoes. We are very curious to see whether the infant will resemble the mother or the father.