The year has started very well in terms of mountain gorilla births, with five newborns in the gorilla groups monitored by the Karisoke Research Center in Rwanda. Not only that, but three of the newborns were born to first-time mothers.

In scientific terms, we use the word “nulliparous” to denote females 8 years of age or older who have never given birth. After they have given birth, they are called “multiparous” females. 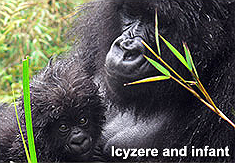 One of the new mothers this year, Icyzere, is not yet even 8 years old, however, so she was even too young to be called nulliparous. Therefore, it was a big surprise to us to find her on Feb. 2 with a tiny little infant, born just few hours earlier!

In terms of her background, Icyzere transferred at a very young age from her natal group (called Susa group, which is one of groups designated for tourism) to Pablo’s group (a long-established group studied at Karisoke), and then to Isabukuru’s group, a new group we also monitor. She has always been distinguished by her small size and friendly personality, which had made her very good company for all group members during resting sessions.

We are astonished at how well she is performing as a young mother. She ably carries the baby while she moves and feeds and protected him well from the cold during the heavy rains of April. Isabukuru, the dominant and only silverback of the group, seems very proud of his first infant. What he doesn’t know is that according to our gestation time calculation, the baby may have been conceived when she was still in Susa’s group (and thus not be Isabukuru’s offspring). Upcoming genetic analysis should give us scientists some interesting results, but fortunately will not influence the paternal affection of the “acquired” father. 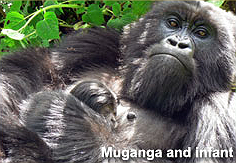 Muganga, a 12-year-old female, ended her nulliparous stage by becoming a mother for the first time on April 7. Unlike Icyzere, she is a pretty large gorilla and her newborn found himself very comfortable in the warm hands of his mother. When Muganga is resting she is not afraid to leave the baby on her breast, exposed to the view of the other gorillas all around. Apparently she has benefited from the experience of the other two mothers in the group, since she shows confidence in taking care of the infant.

Muganga transferred from Susa’s group together with Icyzere in June of last year and they stayed together for two months until Muganga moved into Kuryama’s group, where she lives now. The calculation of her gestation period has led to confusion, since it falls exactly into the timeframe of her transfer from Isabukuru to Kuryama’s group. Once again, DNA analysis will give the real answer to the paternity. In any case, the dominant silverback Kuryama and the second-in-charge Kirahure are often in close proximity to Muganga and despite our paternity confusion they are taking care of the protection of the infant with attentive and reassuring vigilance. 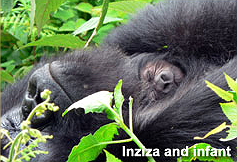 The most pleasant surprise arrived when Inziza, a 13-year-old female in Shinda’s group gave birth on April 16. For several years we’ve been expecting an offspring from her and we are glad now to observe her trying to protect and cover her little one from all gorillas around her. Inziza is a very protective mother and this behavior attracts the attention of the blackback (young male) of the group, who follows her often, displaying and approaching in order to observe the new infant. Inziza is not happy with this constant proximity of the young male and she frequently pushes him away, making a typical vocalization called a “pig grunt.” She seems to feel much more comfortable when she is close to the other females and to the silverback second-in-charge, Ugenda. When Inziza feels protected, she allows the infant to raise his minute head and explore the world around with his semi-open eyes. Among the silverbacks of the group, Ugenda seems to be the closest to Inziza, maybe because of paternity. Although this is not her natal group (she transferred to it in July 2007), she has been in the group long enough to be sure that the father of the infant is a group member….

It is a privilege to observe all these new gorilla mothers and infants, and to learn more from them about the maternal care behavior of this fascinating species.