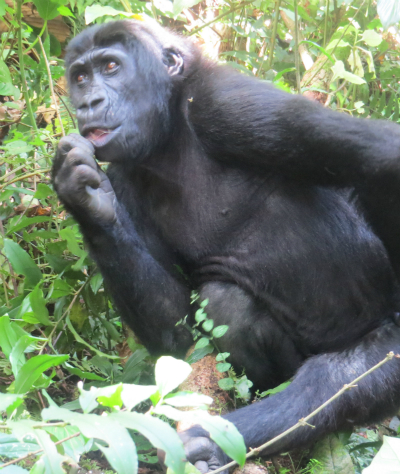 Ihirwe, a female Grauer’s gorilla confiscated from poachers in Rwanda in 2011, was transferred to the GRACE (Gorilla Rehabilitation and Conservation Education) rescue center in a remote region of northeastern Democratic Republic of Congo on May 19, 2014. GRACE is the world’s only sanctuary dedicated to Grauer’s gorillas. Grauer’s gorillas are a type of eastern gorilla (formerly called eastern lowland) that are found only in eastern Congo, where their numbers have declined dramatically in recent years.

Ihirwe, now about 4-1/2 years old, had been living in a quarantine facility in the town of Kinigi, Rwanda, where the Fossey Fund and Gorilla Doctors provided caregivers to stay with her 24 hours a day. Now, at GRACE, she has the opportunity to live with other Grauer’s gorillas, learn normal gorilla behaviors, and begin the process of practicing skills needed to one day survive in wild conditions.

Upon her arrival, a primary school located near GRACE welcomed the new little gorilla with a song that features the names of the GRACE gorillas. Local people gave Ihirwe the Congolese name of “Muyisa,” which also happens to be the name of this primary school, so now she is called “Muyisa.”

Muyisa has now seen the other gorillas from a nearby enclosure, but is not yet in the group with them directly. At first she was a little unsure about how to react to the other gorillas, probably because she has been living by herself (and with human caretakers) for so long. But she slowly warmed up to them and lately has even been playing with the younger ones who are in adjoining rooms in the gorilla night house (through the mesh that separates the enclosures). Assuming all continues well, she should be ready for integration shortly. Staff at GRACE also report that Muyisa is starting to enjoy GRACE's wild-like diet of vegetation and is making her own nests with vegetation each night.

Overall, the 13 gorillas at GRACE are healthy and thriving. The social group remains cohesive,and individuals are behaving very much like their wild counterparts. Females are jostling for social rank, and 12-year-old male Ntabwoba is growing into his role as silverback.

Ihirwe’s transfer to GRACE was coordinated by a coalition of conservation partners that included the Rwanda Development Board, Congolese Wildlife Authority, Dian Fossey Gorilla Fund International, Gorilla Doctors, Gorilla Rehabilitation and Conservation Education Center, Great Apes Survival Partnership, and Greater Virunga Transboundary Collaboration. The MI 17 transport helicopter flight was part of the U.N.’s regularly scheduled air traffic within the region as part of their Organization Stabilization Mission in DR Congo (MONUSCO) effort, and arranged to transport the gorilla through Great Apes Survival Partnership. The flight reduced what would have a grueling 150-mile (250 kilometers) trip overland to less than two hours.