One of the major duties of our trackers and researchers at the Karisoke™ Research Center in Rwanda is to collect behavioral data every day on all of the gorilla groups that we monitor. Our long-term database contains information on many aspects of mountain gorilla behavior, ecology and population dynamics. Scientists compile hours of observational data in order to make hypotheses, see patterns, and learn more about the gorillas’ lives. Some of the interesting behaviors that researchers look for when following gorillas have to do with mating, feeding, and affiliative and agonistic (aggressive) behaviors both within groups and between groups. This is why Karisoke observers were especially interested when an unknown lone silverback found himself in the middle of Pablo’s group on June 1. 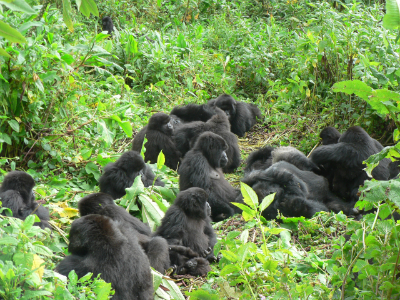 Pablo’s group is the largest group we monitor and the largest recorded mountain gorilla group ever. There are currently 45 individuals in the group, which includes five male silverbacks (adult males) and eight blackbacks (young adult males), although one of the silverbacks seems to have left the group recently. This makes the group very well protected and strong, though it also sets the scene for possible internal conflict. Because of its uniquely large size, Pablo’s group is one of the more interesting gorilla groups to study. Things become even more interesting when they come across a stray silverback or a lone silverback comes upon them, presenting a challenge. 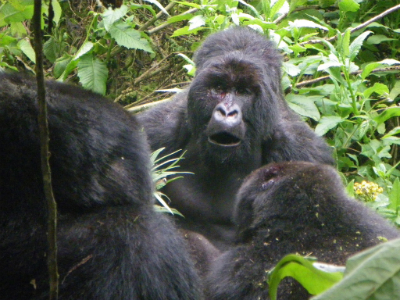 Such was the case on June 1, when researchers heard screaming alarm calls from above the core group. Observers and trackers went to the source of the intense vocalizations. When they got there, they saw some Pablo blackbacks watching a lone silverback nearby. Immediately, all the gorillas in the group got up from their feeding and resting positions and moved toward the unknown silverback, who had been quiet up to that point. Then almost everyone in Pablo’s group attacked him. The lone male was kicked, bitten, hit, dragged and scratched a number of times. Within approximately 20 minutes, he was attacked six different times.

Silverbacks Gicurasi, Musilikale and dominant silverback Cantsbee displayed a number of times, making many chest beats and hooting vocalizations. The entire group remained cohesive in their attempts to attack the lone silverback. Every time he tried to leave the group, they ran at him and grabbed him, preventing his escape. Finally, after about 45 minutes, the lone silverback was able to slowly get away and the silverbacks returned to their main group.

Didier Abavandimwe, a Karisoke™ research assistant, reported: “…We continued to follow the lone silverback and reached him at 13:30, approximately 180 meters away from Pablo’s group; he was resting and breathing heavily. He was very badly wounded and bleeding. …”

A trail of blood followed the unknown male. Part of his ear was bitten and torn off. He had several deep wounds all over his body. His face dripped with blood from scratches. He was weak and moved very slowly. However, over the next few days trackers tried to continue tracking him but there were no more signs of him and he could not be located.

Karisoke researchers have been trying to figure out the identity of this lone silverback, but his noseprints (what we use for formal identification of gorillas) do not match any of our known silverbacks who have become solitary. Ironically, on June 13, Pablo’s trackers came across the dead body of a silverback and took it down the mountain for a necropsy. Unfortunately, the face and body were already too corroded to see a noseprint for comparison. Evidence suggested that this gorilla had died five to seven days before. However, the veterinarians noticed that he was missing one of his left feet and we did have records of a different silverback, Bikwi, with a missing left foot. So this body may have been Bikwi instead and the identity of the lone silverback remains a mystery.