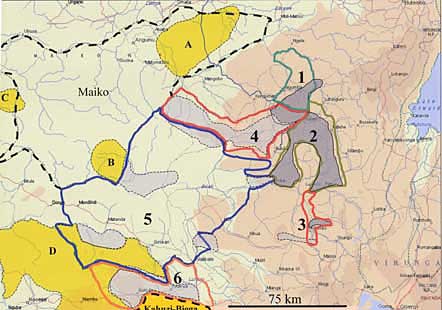 Recently, the Fossey Fund completed signing partnerships with three new Congolese projects, modeled after the success of the Tayna Gorilla Reserve, which together with three other ongoing Fossey Fund projects, will form a continuous zone of community conservation efforts protecting a large biodiversity block between the Maiko and Kahuzi-Biega National Parks in eastern Congo.

The Fossey Fund has been working with the Tayna Gorilla Reserve (Zone 1, Figure 1) since 2000, and signed a primary partnership with that project in March 2001.Soon thereafter, neighboring collectives in the Walikale and Masisi Territories, RECOPRIBA (Zone 2) and ISLN (Zone 3), respectively, organized themselves for a similar conservation effort, following the Tayna model.

The Fossey Fund began technical and financial support for those projects in December, 2001, encouraging them to begin studies and surveys to better define human habitation zones, forest zones, and large mammal distributions so that they can delineate rational boundaries for their intended nature reserves.

As they continue to conduct these reconnaissance trips (based on satellite image support from the Albertine Rift Biodiversity Monitoring Project of the Fossey Fund supported by USAID, they also take their education campaign to the field in an effort to create consensus and foster awareness amongst the local stakeholders living in very isolated villages.

Their efforts are fully supported by their system of traditional African governance and, equally important, these projects have signed partnerships with the government agency responsible for the protection of nature (the ICCN, Institut Congolais pour la Protection de la Nature). Their efforts are also supported by partnerships with the Tayna Reserve, which continues to provide them office space, computer time, and technical training.

During 2002, while the activities of RECOPRIBA and ILSN were ongoing and supported by the Fossey Fund and Tayna, we began discussions with a neighboring collective, USALA (Zone 4, which covers an administrative and traditional region between the Tayna Reserve and Maiko National Park), and conducted surveys in its eastern sector bordering Tayna (including a "Great Ape Census." supported by USAID and the Louisville Zoo).

During this time, the USALA group organized themselves, sought our local support for their initiative, and formed their own non-governmental organization, so that on November 15, 2002, they were able to sign their formal partnership with the Fossey Fund and the Tayna Reserve. Thus, beginning in December, 2002, they will begin a three-month training session with the Tayna Staff and begin to receive salaries and an equipment budget, so that by mid-2003, they can construct a field station and begin patrols in their eastern sector (where we have documented the presence of gorilla). After that phase, they will begin expeditions to better define gorilla distribution and biodiversity in the region that stretches eastward to the Maiko National Park. This area, according to local reports, is a vast primary forest containing intermittent gorilla populations, saline swamps visited by elephant and buffalo, and a very low human population, ideally suited for establishing a community-managed nature reserve.

Relying heavily on the Tayna experience, they also organized themselves, sought our local support for their initiative, and formed their own non-governmental organization so that by November 15, 2002, they also signed their formal partnerships with the Fossey Fund and the Tayna Reserve.

Formal ceremonies were thus held in Goma, DRC on November 15, 2002 between the Fossey Fund, the Tayna Gorilla Reserve, USALA, RENGYT, and COCREFOBA, and as these partnerships were signed, all projects collectively took a step forward towards their shared vision for the region: the creation of a large community conservation zone, where Graueri gorillas are used as an icon to catalyze conservation activities and environmental education for all fauna and flora.

Will be managed by local stakeholders

This zone, as envisioned by our Congolese partners, will be autonomously managed by local stakeholders, will work in collaboration with neighboring projects, and will eventually create zones of protection, authorized as nature reserves by the government (as Tayna has already successfully done), and are being developed with a much larger regional vision: a protected area corridor situated between the Maiko and Kahuzi-Biega National Parks.

This will provide an even larger protected area in eastern Congo, one composed of two national parks, run by government and supported by international efforts, and, importantly, linked together by a zone of community conservation, wherein a new and important experiment is taking place: the empowerment of local stakeholders to become stewards of their natural heritage.

Our partners eagerly await the response of the international community to also support their efforts as the Fossey Fund takes the message international, and they thank the many supporters of Dian Fossey Gorilla Fund International for supporting and believing in their new vision for the future.

As all of these projects go forward, and they organize themselves into one large "meta-association" (currently underway), our readers can look forward to a wave of new activities in the region. Biodiversity reports will be coming in on gorilla distribution, the state of the forests, and the overall flora and fauna found in each region. Educational activity will flow through these forests, as local inhabitants learn the value and aspirations of community conservation, environmental law and policy, and become guardians, stewards, cartographers, and researchers intent on developing programs for the rational use of their natural resources. As the momentum increases, and each of the partners pull up their sleeves and begin the hard work of entering these vast isolated forest regions, the gorilla will appear as an icon for conservation values throughout this community conservation zone.

Even the most isolated villagers will understand the shared vision throughout the region: that Gorilla beringei graueri will eventually be removed from the endangered species list, and that the fauna and flora that share its forests, will have a secure future alongside man.

Schaller G B (1963) The Mountain Gorilla. The University of Chicago Press, Chicago.

light gray areas indicate distribution as per local informants living in these areas as communicated to staff of various projects.

Areas A and B in Maiko National Park (Hall et al.,1998a, citing Hart and Sikubwabo, 1994; Hart and Hall, 1996). Area C is one of three small populations at the far north-west of the range, described by Schaller, 1963 (it is not known whether this population still survives). Area D is an area of