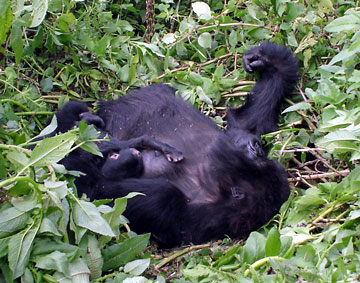 July was a month to celebrate at Karisoke, as Pasika, a 12-year-old female in Shinda's group, gave birth to her second offspring on the fourth of the month.
Pasika transferred to Shinda's group in 1999 from Beetsme's group, where she was one of five offspring of Papoose who, at 41, is the oldest observed gorilla in the Virungas. Her first child, Umutuzo, is now an active and sociable 4-year-old juvenile and a testament to her mother's natural maternal instincts. So far the new infant is doing well and Pasika's calm and gentle nature should ensure her a secure and contented future.

In the education program this month, Karisoke took part in the annual Ruhengeri Mini-Expo, a local trade and craft fair. We displayed information on all of our activities, as well as information on some individual gorillas and their personalities. 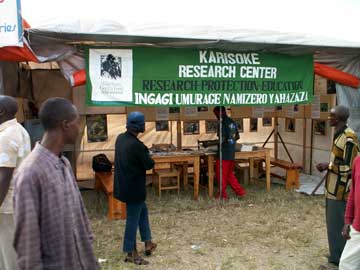 The nightly showings of wildlife documentaries and, on three nights, the movie “Gorillas in the Mist,” drew great crowds and for many, especially the children, this was the first time they have been able to see gorillas outside of still photographs.
The Karisoke stall was well received and has proved to be an excellent step in sensitizing the local community to the importance of gorilla conservation.

As is usual, this time of year sees an increase in water collection in the park, due to the extended dry season. Not only is this a problem for the gorillas due to the forest degradation that can result, but there is also the threat of disease being transmitted from humans to the gorillas.
Karisoke has been working this month with the Rwandan office of tourism and national parks (ORTPN) as well as with our own Ecosystem Health Program in sensitizing the communities surrounding the park about this issue and on how to prevent disease transmission between people and animals.