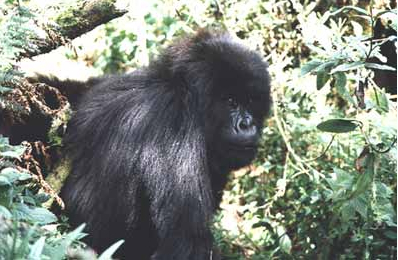 Pasika (8-year-old female) was discovered to be missing on Tuesday, October 12th, 1999. The day before there was a interaction between Beetsme and Shinda's groups. While the encounter was by all accounts exciting, it was not described as aggressive by our trackers and scientists in the field.

Pasika was apparently seen during the interaction on Monday, but was not found in Beetsme's Group on Tuesday after the interaction. The gorilla trails leading away from the interaction site were followed on Wednesday and Thursday. Even the military was called in to help . They performed sweeps across the whole area between the interaction site and the areas the two groups had moved to. Pasika reappeared in Shinda's group on Friday morning after apparently spending the night alone some distance away. Pasika had made her first group transfer!