Conservation is important but it’s also complicated!  That was the main point of contention in the Fossey Fund’s latest conservation education initiative for secondary schools in Rwanda. We already provide conservation education courses, support for nature clubs, teacher training, materials and more to many local schools, but holding a debate was a first for us, and a unique way to engage school children in conservation and help spread conservation awareness.

Debates are something that Rwandan secondary schools already engage in and they are very popular, so using conservation as a topic seemed like a good way to get more students involved and to engage in deeper thinking about conservation. Since conservation is a complex topic, it also worked well as a point of debate.

As part of their preparation, student debaters from the Ecole Secondaire des Sciences Musanze school came to our Karisoke Research Center, visited our gorilla conservation exhibit there, and met with Director Felix Ndagijimana and Gorilla Program Manager Jean Paul Hirwa to learn more and ask questions. 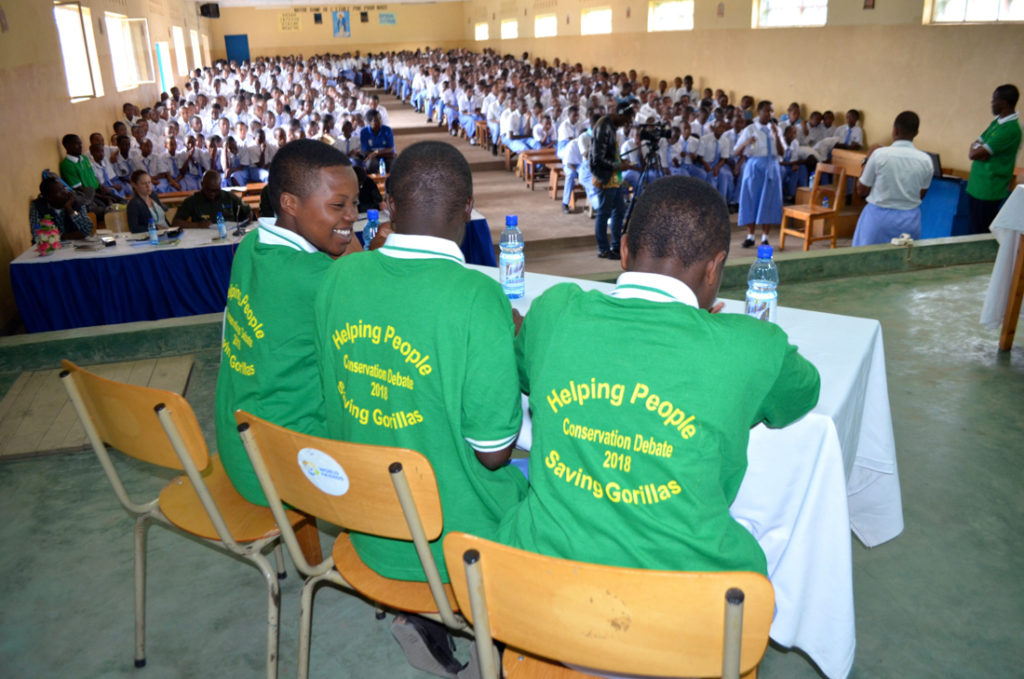 People are the best hope for gorillas:  Yes or No?

The topic for the debate was “People are the best hope for mountain gorillas” and teams argued both sides of the statement. Judges included Jean Paul Hirwa, our Rwanda Research Director Dr. Winnie Eckardt, and two wardens from the Rwanda Development Board, which operates Volcanoes National Park, where the mountain gorillas live. All 720 students from the school attended the debate, as well as the teachers and headmaster.

Interestingly, it was the opposition who won the debate, because their arguments were more well crafted, with their slogan of: “Gorillas are OUR greatest hope but we are their greatest challenge!”

Hirwa and an RDB representative spoke afterward to reiterate the importance of conservation and that gorilla tourism benefits not only wildlife but also local communities. Students in the audience were also invited to join in at that point and the headmaster also spoke, saying he remembered when Dian Fossey worked in the park and was grateful for the work she started.

Excitement, rewards and lots of fun!

Members of the winning team received a backpack and a copy of “Gorillas in the Mist,” with the best speakers also receiving school supplies. The school and its environmental club also received prizes. And, all the debaters were invited on a trip to see the golden monkeys in the park.

Here are some of the comments from the students about what they learned from participating in the debate: