Some females transfer from subgroup to split group and back again…

Young silverback Bwenge has been trying to lead his own new group, which we reported last month had grown to nine members. On May 21, an interaction took place between Bwenge’s group and Cantsbee’s subgroup, a part of the main long-term groups we follow at Karisoke. The dispute was not been observed directly but the consequences were evident once the two Karisoke field teams reached the groups.

Four females — Maggie, Nzeli, Ginseng and Isaro — had transferred from Bwenge’s into Cantsbee’s subgroup. Now the two groups were trying to adjust, with Cantsbee’s group busy in taking care of the arrivals and Bwenge trying to get them back. 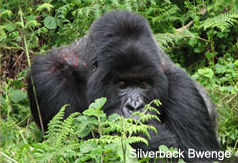 Despite evident tiredness and several wounds on his right shoulder, left arm and on both wrists, Bwenge did not give up. He and his four remaining females (Ntobo, Cyiza, Faida and Ruhuka) stayed in the area for the three days after the interaction. Bwenge continued calling and repeatedly displaying in order to call back the lost members.

On the other side, Cantsbee’s subgroup (the biggest part of Pablo’s group, which recently split in two) was welcoming the new arrivals. Maggie, Nzeli and Ginseng were actually rejoining their original group while Isaro (who came originally from Beetsme’s group) was a new face.

All gorillas from Cantsbee’s soon recognized the three ex members. Irakoze and Umutekano, the subadult son of Ginseng and subadult daughter of Nzeli, rejoined their mothers, spending a lot of time with them in physical contact. Maggie was also surrounded by several members of her family. Unfortunately we couldn’t observe the meeting with her juvenile daughter Turibamwe, since she stays in Pablo’s subgroup.

Less peaceful was the leader of the group, Cantsbee, who definitely showed aggression toward the females who had left him at the end of January. He displayed numerous times to them, even with aggressive behavior, though always with soft hits. The three females tried to avoid his tough approaches and showed submission. 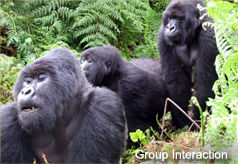 Isaro had a very different welcome into the new group. She was the only one totally new to the group, having been originally in Beetsme’s group before moving into Bwenge’s group. Her transfer follows recent trends we have observed; in particular it is similar to the Bishushwe transfer into Beetsme’s group (November 2006). A subordinate silverback, Isabukuru is keeping the new female close to him and the two of them remained behind the group. The first day he was frequently displaying and acting aggressively toward her. She reacted submissively trying to avoid his approaches. But the two of them are always together and rarely mix with the other individuals who stay close to Cantsbee. Other members of the group show curiosity for the new arrival and sometimes they approach her, staring, touching or walking around in strut stance posture. Isaro, who normally was very playful and social in Beetsme’s and Bwenge’s group, now has modified her temperament and is mainly isolated with Isabukuru, feeding and resting with him and observing uninvolved the numerous interactions happening around her.

The really big surprise happened on May 23 in the evening, when Maggie and Ginseng again left the group, rejoining Bwenge who was some 800 meters away and who was in auditory contact with Cantsbee’s subgroup. After the reunion, Bwenge started moving far from the competitor group going back to his usual area.

On May 27, Nzeli was not seen in Cantsbee’s group and despite the effort of Karisoke staff was not found in the area around the group. She then rejoined Bwenge’s group on the evening of May 28, walking all the way (more than 3 kilometers) between the Mudakama area (Cantsbee’s region) and Muntu area (Bwenge’s region) alone.

Once again, female gorillas are demonstrating their independency and skills traveling alone to satisfy their own wish in being in one group or another. Karisoke staff continue to regularly monitor all these changes and the behaviors of the gorillas with intense interest!