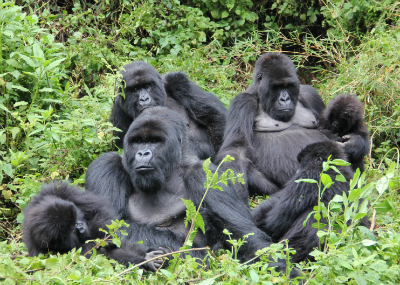 Extreme conservation, which involves the daily, physical monitoring and protection of the mountain gorillas, is only possible with animals habituated to human presence. But retaining the trust of the gorillas—who face a considerable amount of stress in their environment—can be challenging, especially in the wake of a traumatic event.

Isabukuru’s group weathered a very stressful period beginning in December 2013, and Fossey Fund field staff have been working to re-habituate the group to the routine of daily monitoring ever since. The strong commitment of supporters like The Milton and Tamar Maltz Family Foundation and others, who provide critical funding for our protection and monitoring programs in Rwanda, allows our field staff to carry on protecting each of the 120 mountain gorillas we monitor even when the going gets tough.

At the age of 21, Isabukuru is a large silverback, known for being an unusually attentive father, often playing with the youngsters in his group and grooming them. However, he is also a fierce protector of his family, and field staff know that he can be temperamental, exhibiting unpredictable reactions to stressful events.

In December, Isabukuru’s group interacted with lone silverback Rukundo in the forest. Encounters like these are very dangerous for gorilla infants, who can be attacked by silverbacks from outside of their group. Sadly, during the interaction with Rukundo, one infant from Isabukuru’s group was killed and another, called Icyororo, sustained life-threatening injuries.

Fossey Fund field staff reported Icyororo’s injuries to the park authorities and veterinarians. Together, the partners made a decision to treat the infant. After the veterinary intervention, the group showed considerable signs of stress. Both Isabukuru and his second-in-command, silverback Kubaha, charged Fossey Fund field staff and screamed at them when they tried to approach in order to assess the infant’s condition.

Field staff were shocked by Isabukuru’s and Kubaha’s behavior, as they had never before seen such a violent reaction following a veterinary intervention. Gorilla Program Manager Veronica Vecellio says, “It was too much for even the bravest of trackers! We are very lucky that nobody got hurt.” Several days later, field staff also noticed signs that the group may have had another interaction, possibly contributing to their agitation.

Field staff continued to experience the same reaction whenever they tried to approach Isabukuru’s group. After a particularly bad experience in January, when trackers were again charged and screamed at by Isabukuru and Kubaha, the staff realized that they would need a renewed effort and a more focused strategy for regaining the group’s trust. They began to treat the group much as they would a completely wild group of gorillas whom they were trying to accustom to human presence.

The trackers decided not to approach the group for a while and to suspend behavioral data collection in order to give them time to calm down. Instead, field staff began following the group’s tracks through the forest at a distance. When the gorilla tracks became fresh, so the field staff knew the gorillas were nearby, they stopped following the group so that they would not stress them.

Vecellio reported, “Regaining Isabukuru’s trust will be hard, but I’m confident that giving him some time will help.” 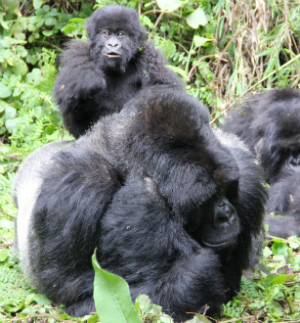 This period was also stressful for field staff, not only because of Isabukuru’s dangerous behavior, but also because they could not verify if the infant Icyororo had survived his injury. In addition, the gorillas did not have the full protection of our field staff and could be exposed to snares and poachers. It took until February for the trackers to finally get a good glimpse of Icyororo. However, they were relieved to see that he was recovering well from the injuries he had sustained during the interaction in December.

For now, it is still touch-and-go with Isabukuru’s group. On some days, the gorillas seem relatively relaxed when the field staff visit them. But as recently as April, Isabukuru charged trackers because a juvenile female from his group, Keza, ran away from them. Keza’s anxiety probably caused Isabukuru to react in her defense.

The experience of working with Isabukuru’s group over the last several months has been an opportunity to reflect on the strong commitment and experience that extreme conservation measures demand of the field staff. Their compassion for Isabukuru and his family, bravery in the face of aggressive silverbacks, and expert knowledge of gorilla behavior are all essential to continue protecting the 14 gorillas in this family.

“Studies have shown that mountain gorillas habituated to human presence and provided with daily monitoring, protection and veterinary care have fared much better than their unhabituated counterparts,” says Tara Stoinski, Ph.D., the Fossey Fund’s vice president and chief scientist. “However, keeping a large number of experienced field staff in the forest every day, who have the skill to protect gorillas like Isabukuru and his family even through challenging periods, requires a huge financial investment. The Milton and Tamar Maltz Family Foundation make this possible, and we are incredibly grateful for their support.”

In addition to funding provided by The Milton and Tamar Maltz Family Foundation since 2007, the Fossey Fund’s gorilla protection teams are supported with generous donations from a number of corporate partners, foundations, and private individuals.